The stakes are high for both sides as the season comes to a close.

For Wrexham the task is simple: after failing to take advantage of Stockport’s defeat on Saturday, only a win will do. That would bring the table-toppers back to within 4 points, with a massive clash at The Racecourse to come.

Weymouth know that this match could be momentous for them too: their fate is not in their own hands because Aldershot’s performance at Bromley could condemn them to relegation regardless of how they do against Wrexham. If Aldershot win, there’s nothing The Terras can do, and if The Shots draw, Weymouth need to win. Defeat means Weymouth will go down no matter what happens elsewhere.

The Terras might have had a difficult season, but they’re no pushovers at home. They’ve only conceded one home goal fewer than Chesterfield, and unlike the rest of the bottom four, their home defeats haven’t hit double figures. They’ve also taken points off a disproportionate number of promotion-chasers: Grimsby, Bromley, Chesterfield and Notts County have all been held to draws by Weymouth.

However, we shouldn’t pretend that 2022 hasn’t been a struggle for them. Only Dover and Aldershot have scored fewer goals on their own patch, and they have managed only one win in their last 21 matches – a 1-0 home victory over Eastleigh in mid-February – winning 2 points out of the last 30. At least two clean sheets in their last two home games, including a shut-out of promotion-chasing Grimsby, show that they are going to fight to the end.

Capable of getting the ball down and passing it, Weymouth’s success against strong teams is no coincidence. They also gave Stockport County a rough ride at the end of February, and were unlucky to leave Edgeley Park with a 1-0 defeat, having enjoyed the better of the game after going behind, Wrexham can vouch for their determination too, having also beaten them 1-0 at The Racecourse in December.

Manager David Oldfield has overhauled the Weymouth squad over the last couple of months, signing seven players since replacing Brian Stock, who departed in mid-January after 7 consecutive defeats.

Oldfield enjoyed a successful spell in charge of National League South side, Oxford City, and inherited a side which contained talented on-loan defender Haji Mnoga, who has been in superb form since joining from Portsmouth, and Cameron Murray, who covers a terrific amount of ground in the middle of the pitch as he looks to drive his side forwards.

Jordan Davies gave Wrexham the lead after half an hour, but Weymouth dug in and Wrexham had to work hard for the 1-0 win. 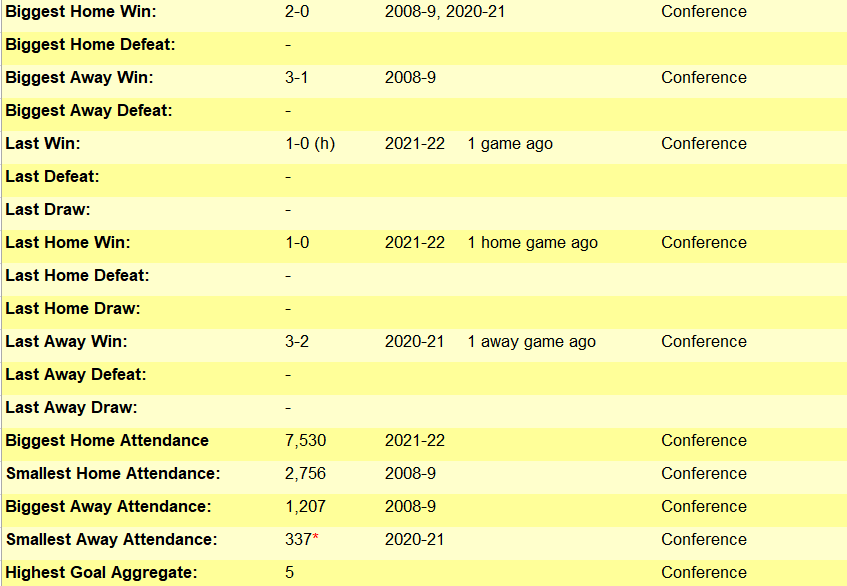 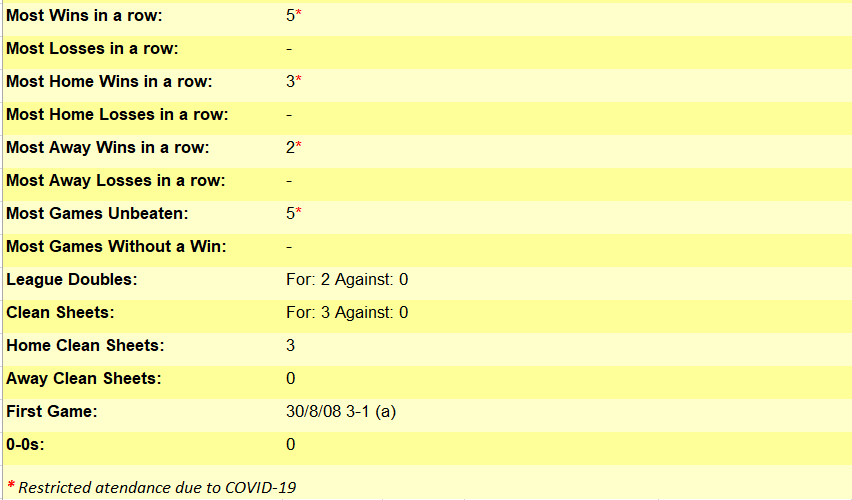 Wrexham have a happy record at Weymouth, winning and scoring three goals in both of our visits.

Last season’s win was a remarkable affair, though. Dean Keates responded to back-to-back disappointing results by switching to a three man defence for the first time in the season.

However, it didn’t work in the first half, as we simply didn’t turn up, and were overrun. Weymouth took a deserved 2-0 lead into the break and it was hard to see how the game could change.

Keates made necessary changes during the interval. While the shape remained essentially the same, Jordan Davies was brought on off the bench to offer a more attacking option on the left, and matters immediately improved. However, at the midway point of the second half we were still 2-0 behind, so Keates took further action. Adi Yussuf and Dan Jarvis replaced Elliott Durrell and Kwame Thomas, and had an immediate effect.

Within three minutes Yussuf had pulled a goal back, although it looked suspiciously like Theo Vassell had got the decisive touch, Yussuf’s swish at the ball as it passed him seeming to have not made contact.

A minute later Wrexham were level, and this time Vassell definitely scored it. With a mixture of determination, strength, skill and luck, the centre back drove through Weymouth’s defence before planting the ball in the net and setting up a grandstand finish.

As often happens, after completing the fightback Wrexham slowed things down a little and, although they were still the only side threatening to get a winner, the game looked to be petering out into a draw when Reece Hall-Johnson burst down the right in the 94th minute.

His mishit cross soared over the stranded goalkeeper and nestled into the net to give us a most unlikely three points.

Our previous win at The Bob Lucas Stadium had been a little more routine, although once again we needed late goals to make the points secure. Debutant Nathan Woolfe, on loan from Bolton, opened the scoring with a brilliant free kick, but despite controlling the game we didn’t get a second goal until the 83rd minute when Jeff Louis broke clear and planted a cute lob over the keeper’s head.

Straight from the kick-off, we went 3-0 up, as the ball was won back and Marc Williams raced through to score.

Weymouth did pull back a late consolation through future Wrexham striker Stuart Beavon, but the victory was well and truly secured. 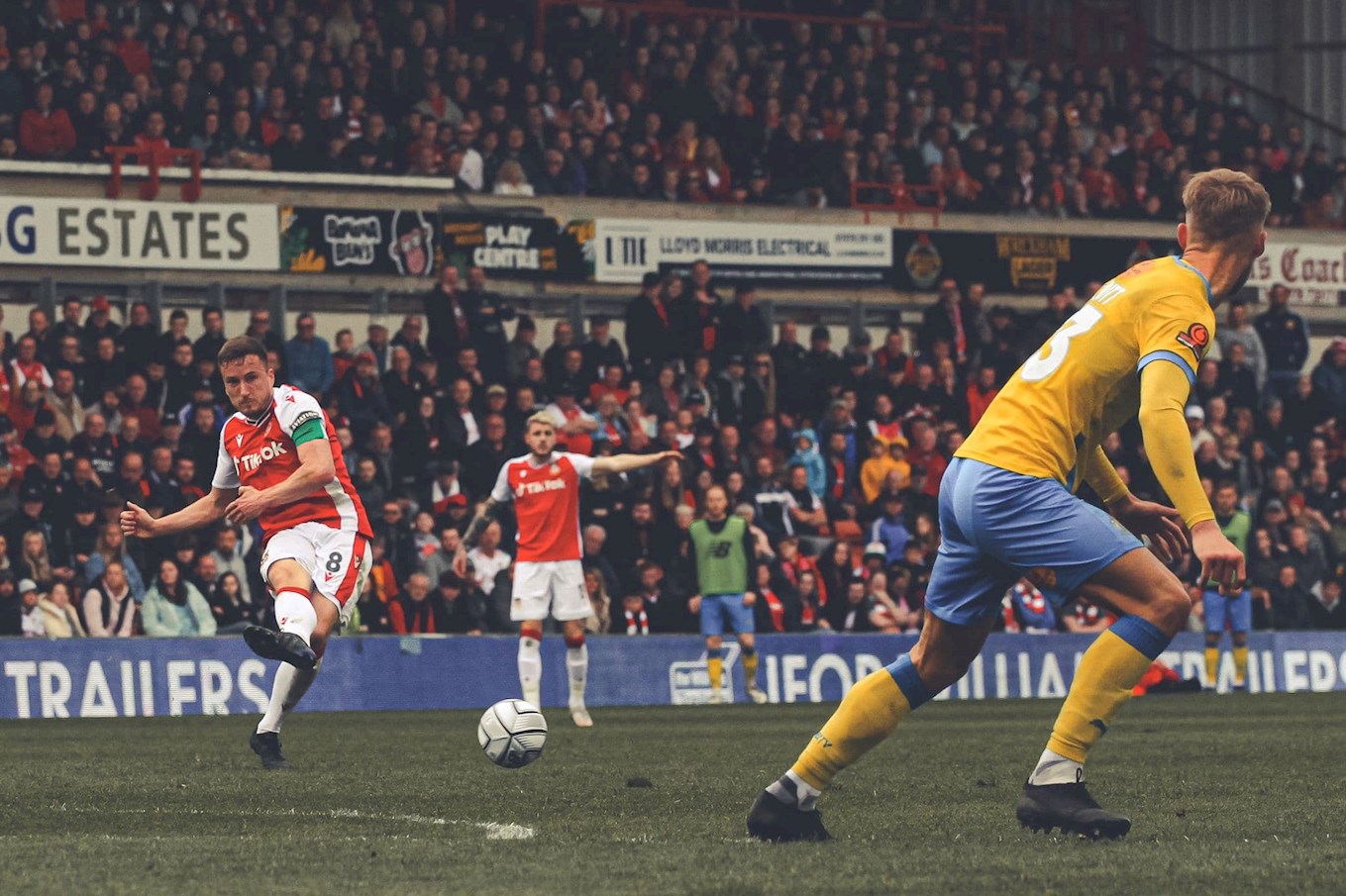 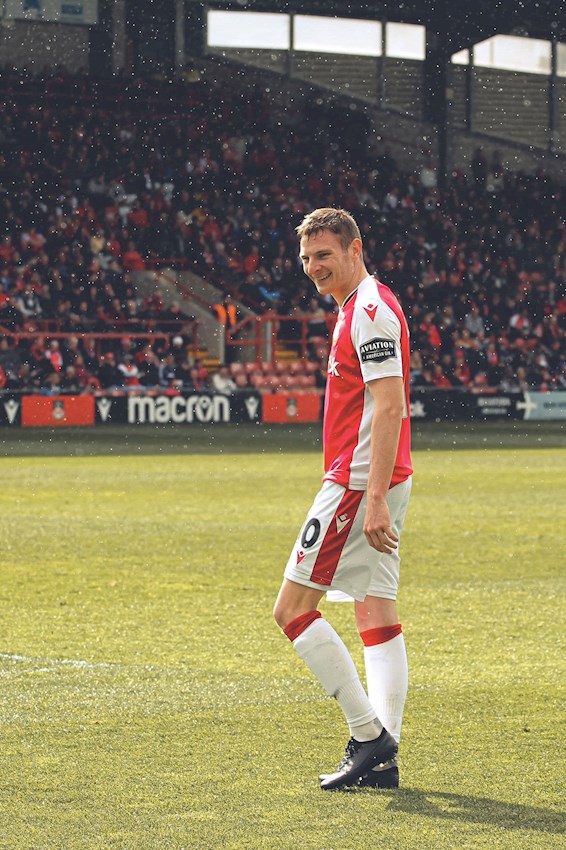 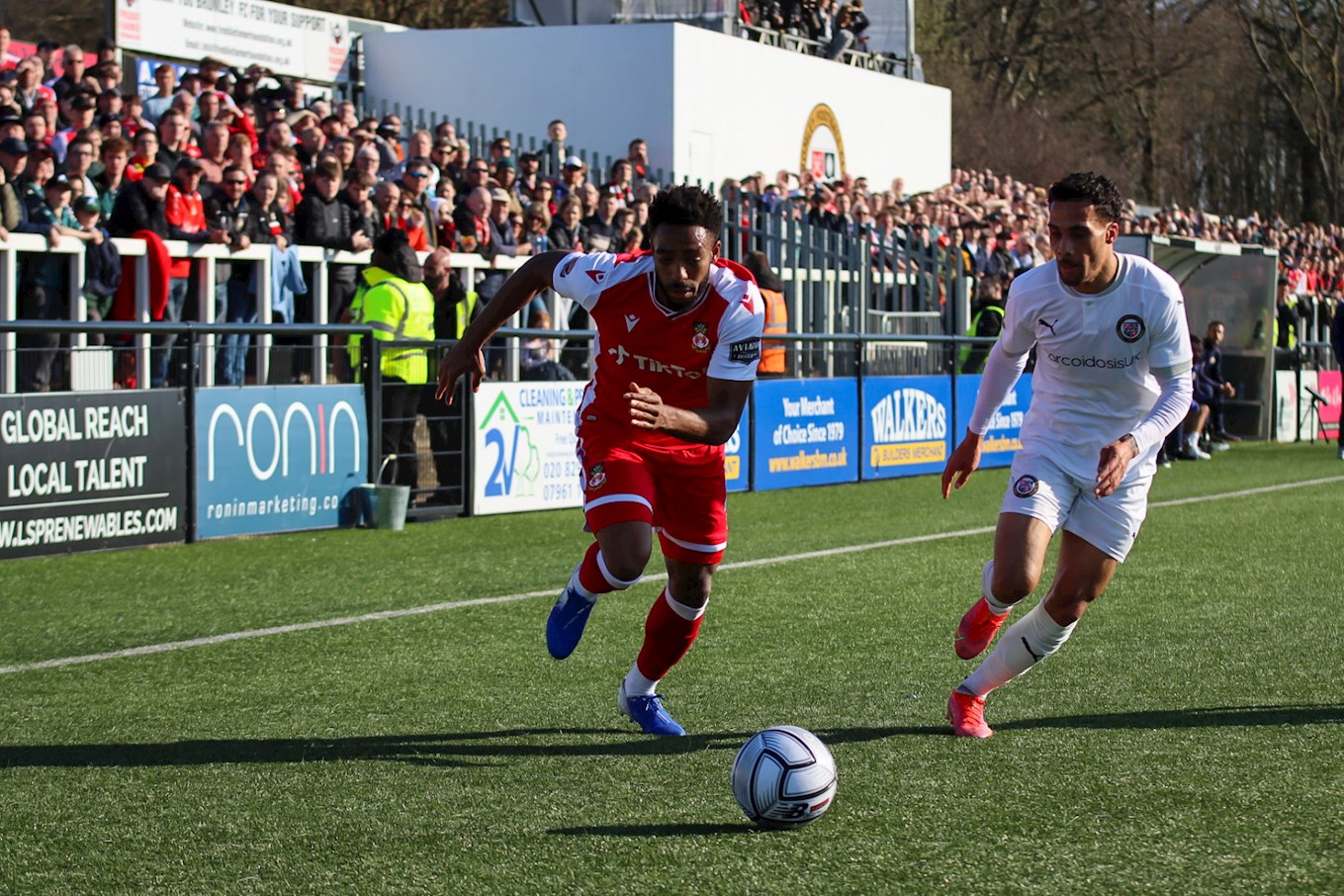 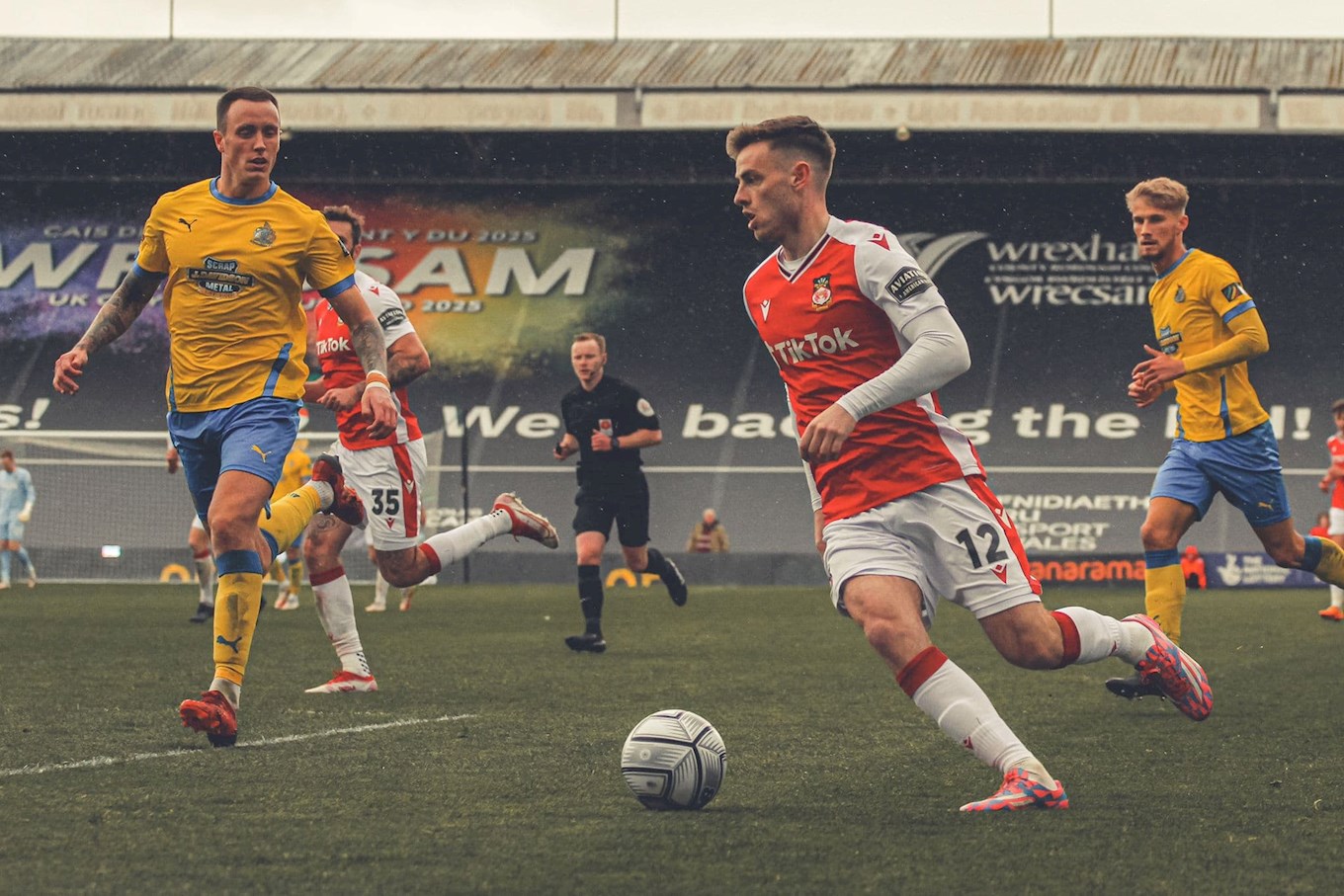 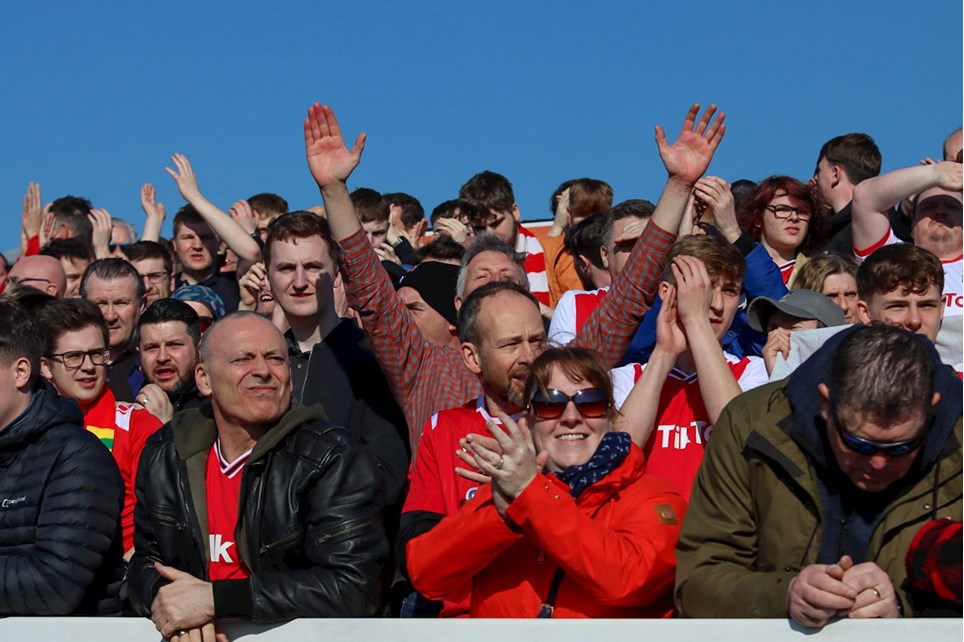 
Wrexham AFC play their second of back-to-back away trips when we make the trip to Weymouth on Tuesday April 26. 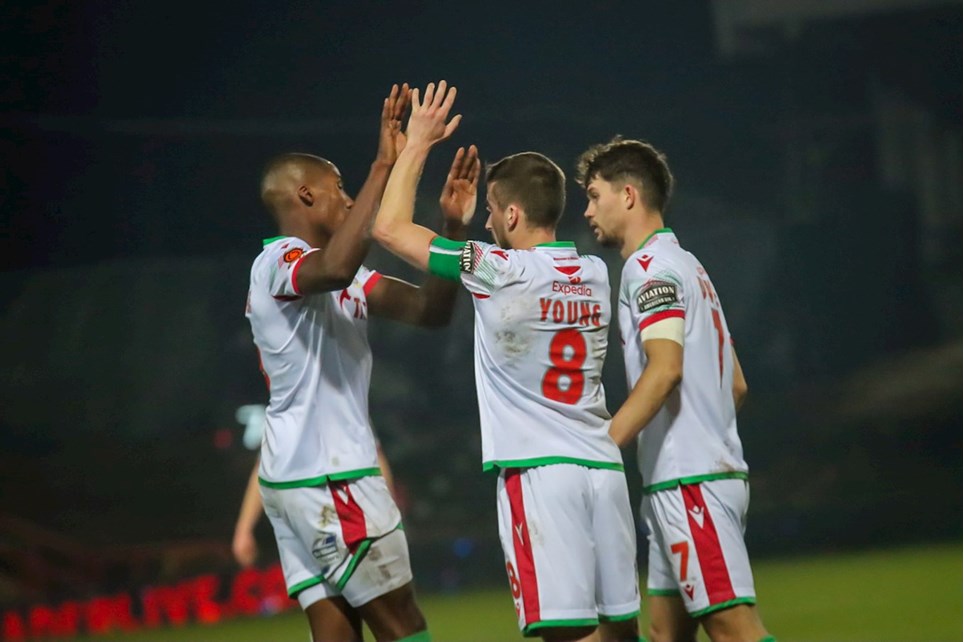 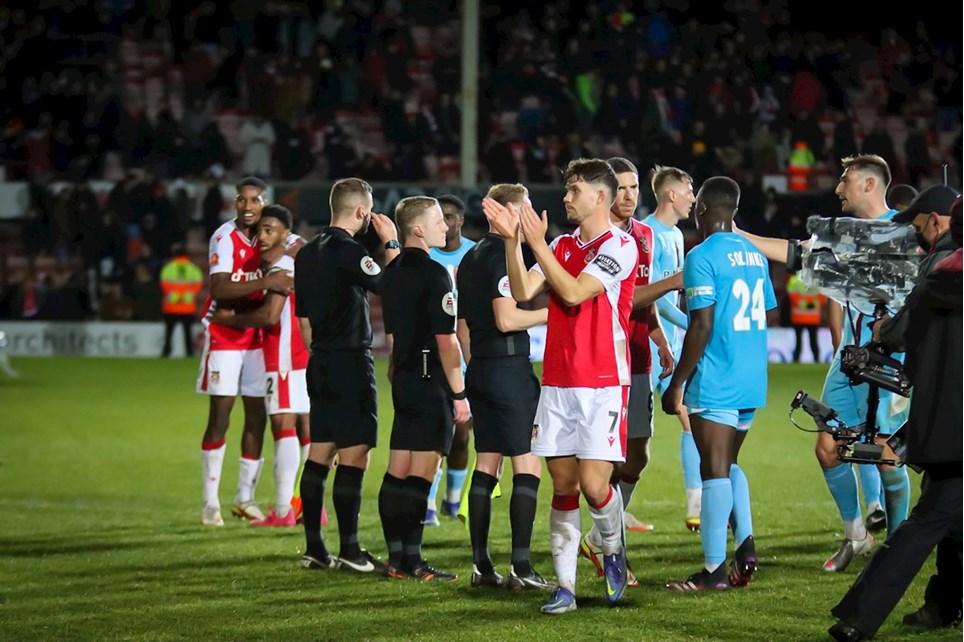 
We are pleased to confirm Tuesday night’s fixture away to Weymouth will be available to stream online, following an application by our hosts to broadcast the match.

Wrexham scored six second-half goals to come from behind and beat Weymouth as the Red Dragons bounced back to winning ways in style.

Paul Mullin headed in to give the Red Dragons the lead, before James Jones made it 3-1. A further goal apiece from Davies and Mullin added to the scoreline before Ollie Palmer wrapped up a dominant away win.

After defeat at Woking on Saturday ended Wrexham’s umbeaten run, Phil Parkinson made two changes to the starting XI – after eight games with an unchanged line-up.

Just two minutes in Palmer could not get the ball out of his feet as Wrexham made an encouraging start, while Christian Dibble made a brilliant reaction save at the other end.

Weymouth caught Wrexham cold on 20 minutes, however, when Tom Blair strode through the midfield and slotted the ball through for Bearwish to slide it home.

The visitors remained patient, however, and Davies headed onto the roof of the net from Ben Tozer’s long throw on 29 minutes.

McAlinden’s thunderous volley was just wide on 33 minutes, while Davies had an effort saved six minutes later, and Mullin headed over the bar in the 40th minute.

Wrexham could not find a breakthrough before half-time, but Davies served up the moment of magic needed just two minutes after the restart.

Luke Young’s quickly taken free-kick found Davies, who opened up his body and unleashed a screaming left-footed shot into the top corner from the edge of the box.

With their tails up, Mullin’s shot was blocked after Jones pounced on a loose pass on 53 minutes and two minutes later Jones turned and shot at the near post to fire Wrexham further ahead.

Davies’ second goal, on 66 minutes, was another excellent one – plucking a ball out of the sky, bringing it down and turning his man in one move and stabbing the ball into the bottom corner with the next.

With Wrexham in control, Parkinson was able to introduce fit-again Tom O’Connor from the bench in place of Davies.

The visitors continued to press, however, and Mullin tapped in from McAlinden’s cross to cap a fine team move on 82 minutes.

Ollie Palmer then wrapped up the excellent win moments later, as Jones slipped the ball through and the striker finished low and hard into the corner.


Wrexham AFC play their second of back-to-back away trips when we make the trip to Weymouth on Tuesday April 26.


We are pleased to confirm Tuesday night’s fixture away to Weymouth will be available to stream online, following an application by our hosts to broadcast the match.