After Tuesday's remarkable win, it's back to The Racecourse as the high-stakes matches keep coming.

Our run of 8 games unchanged already feels like a distant memory as Phil Parkinson has to wrestle with defensive injuries. With Callum McFadzean and Aaron Hayden limping off in the last week, there have had to be changes made in the back five, but both Tyler French and Liam MacAlinden were terrific in the win at Weymouth.

Visitors Souhend United are slap bang in the middle of the division, having risen to 12th place with a midweek win over Boreham Wood. However, their campaign has been anything but average!

Their first season in the National League started badly, with a horrible run of results - 11 losses in their first 17 games -  seeing them appear to be in genuine danger of getting sucked into a relegation battle. However, they picked up in spectacular style to clamber away from danger: 9 wins and just 2 losses over 14 games meant they were one of the form teams of the division in the middle of the season. That good run ended in March, as since then they have replayed their season in microcosm, losing 5 in a row before winning their last three.

Those wins included victories over promotion-chasing sides in their last two matches as both Halifax Town and Boreham Wood succumbed to 1-0 losses.

Manager Kevin Maher will have the experienced Will Atkinson available again after recovering from a tight hamstring, while John White is available after a one-match suspension. However, injury doubts still linger over centre-back Kenny Clark), left-back Tom Clifford and midfielder Noor Husin.

Maher was keen to build on The Shrimpers recent successes when he spoke about the match to the Southend Echo:

“We want to perform and we’ll go there with confidence having won the last three games,

“At the same time we know how tough it is going there.

“They’ll have a great crowd following them and they’re a top team too.

“They’re right in the mix for a reason but the players will be ready and I think it will be a good game.

“They’ve got good players too and it will be a tough afternoon but hopefully it’s one we can go and enjoy.”

Jamie Reckord and Dior Angus got the goals at Roots Hall as Wrexham fought back from a poor start to earn a draw. 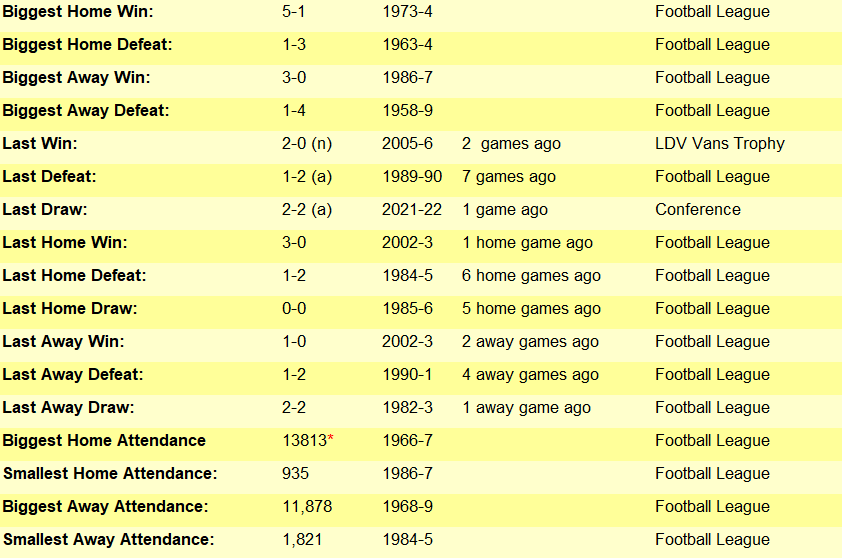 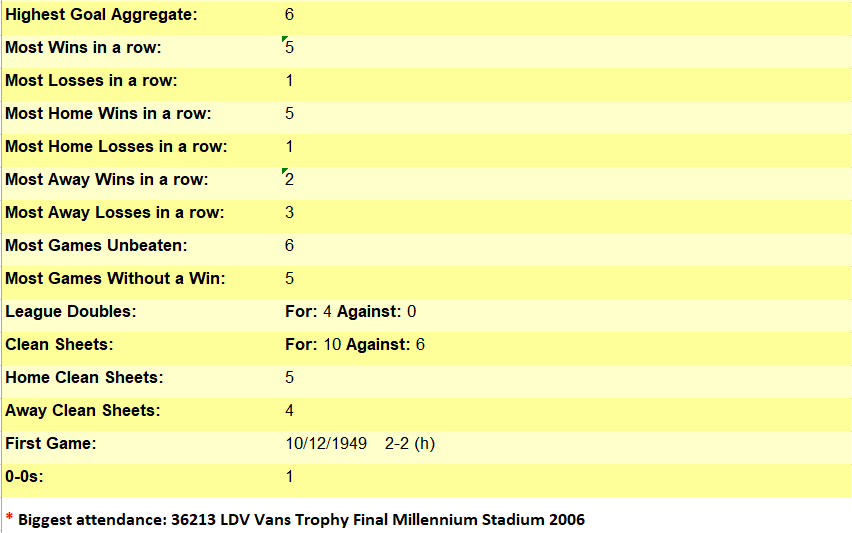 We’re unbeaten in 5 home games against The Shrimpers, although they haven’t travelled to The Racecourse since April 2003.

We were gaining momentum on the run-I to promotion, and the victory would form part of a remarkable end of the season which saw us equal the club record for most consecutive wins.

Carlos Edwards gave us a first half lead, and goals from Andy Norrell and Paul Edwards rounded off a 3-0 victory in the second half.

Goals have come easily for us at The Racecourse in recent clashes with Southend. We’ve scored at least 3 goals in each of their last 4 visits to North Wales.

In October 1997 we ended a worrying drought in style by thumping Southend 3-1 in a midweek game. We hadn’t scored in 5 games leading into the match, and were trailing at half time, but Mark McGregor equalised after an hour and 5 minutes later on-loan striker Ray Kelly 65 grabbed his only goal for us. Karl Connolly converted a penalty to round off the scoring with four minutes left.

That match was the first time United had come to Wrexham in 8 years, and their last game at The Racecourse had been a thrilling affair. Joey Jones opened the scoring, but we lost the lead shortly before the break and went behind shortly after it. Steve Buxton equalised from the spot and it looked like we’d secured a win when Andy Thackeray struck in the 81st minute, but Southend earned a 3-3 draw with four minutes left.

In April 1987 we enjoyed an emphatic win over United, with Steve Charles and Jim Steel each scoring twice in a 4-0 win which was witnessed by just 935 people.

Our biggest win over Southend came in October 1973. Brian Tinnion scored the only goal of the first half, but an own goal two minutes after the break opened the floodgates. Dave Smallman widened the lead, Arfon Griffiths chipped in with a penalty and Tinnion added another late on to complete a 5-1 win.

Some real legends of the club have enjoyed our matches with Southend. Darren Ferguson and Juan Ugarte scored past them in the 2005 LDV Vans Final, of course, Mel Sutton scored the winner on his Wrexham debut at Roots Hall in August 1972, and some fine players feature in the list of our top scorers in this fixture.

Ray Smith, who scored our sole hat trick against Southend in a 4-1 win in October 1967, is top of the list with 5 goals, and one goal behind are Buxton, Grffiths, Smallman and Tinnion.

Southend have won at The Racecourse just twice in 20 games. They beat us 3-1 in August 1963, with Ernie Phythian getting our goal, and repeated the feat 21 years later as Paul Comstive scored in a 2-1 defeat. 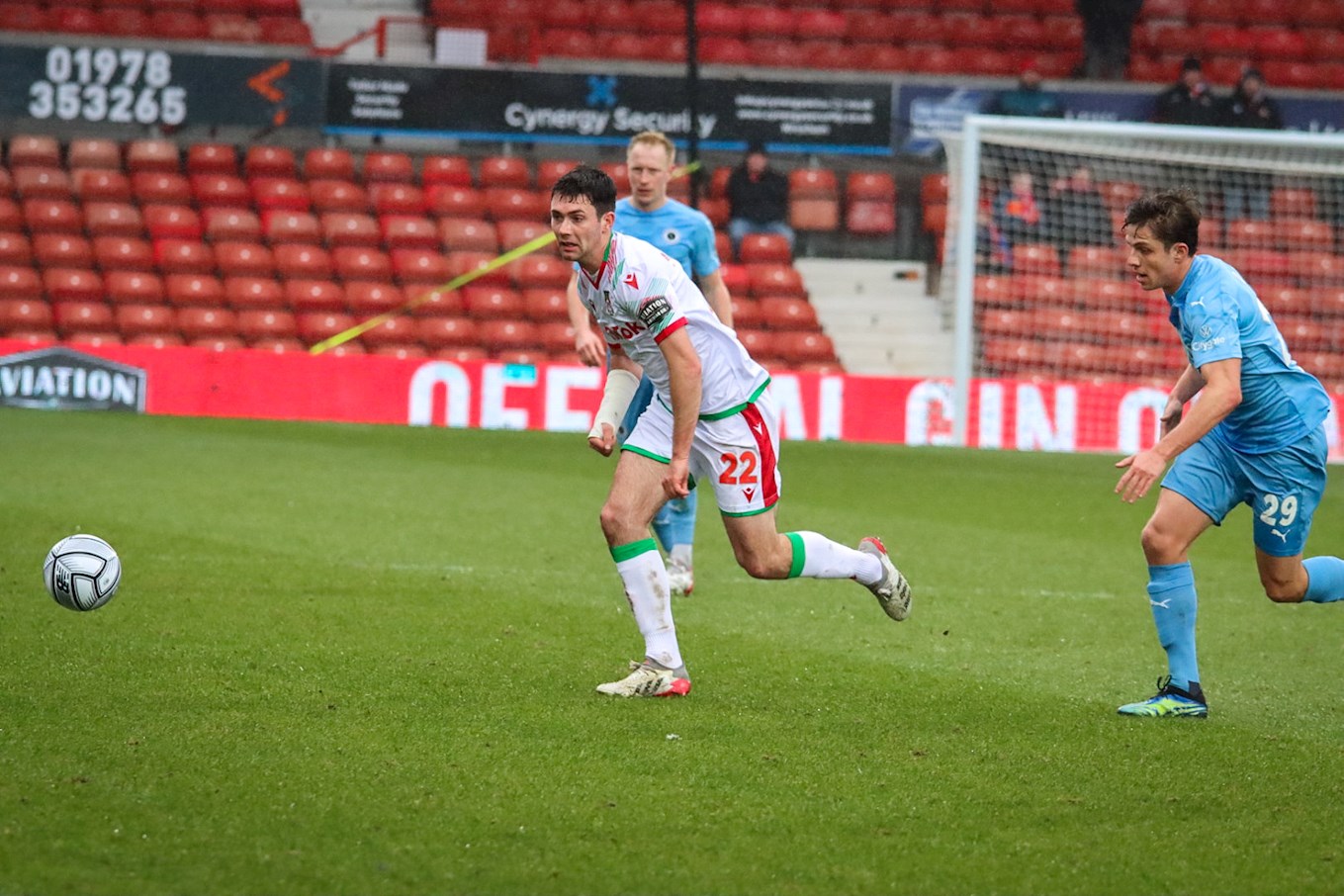 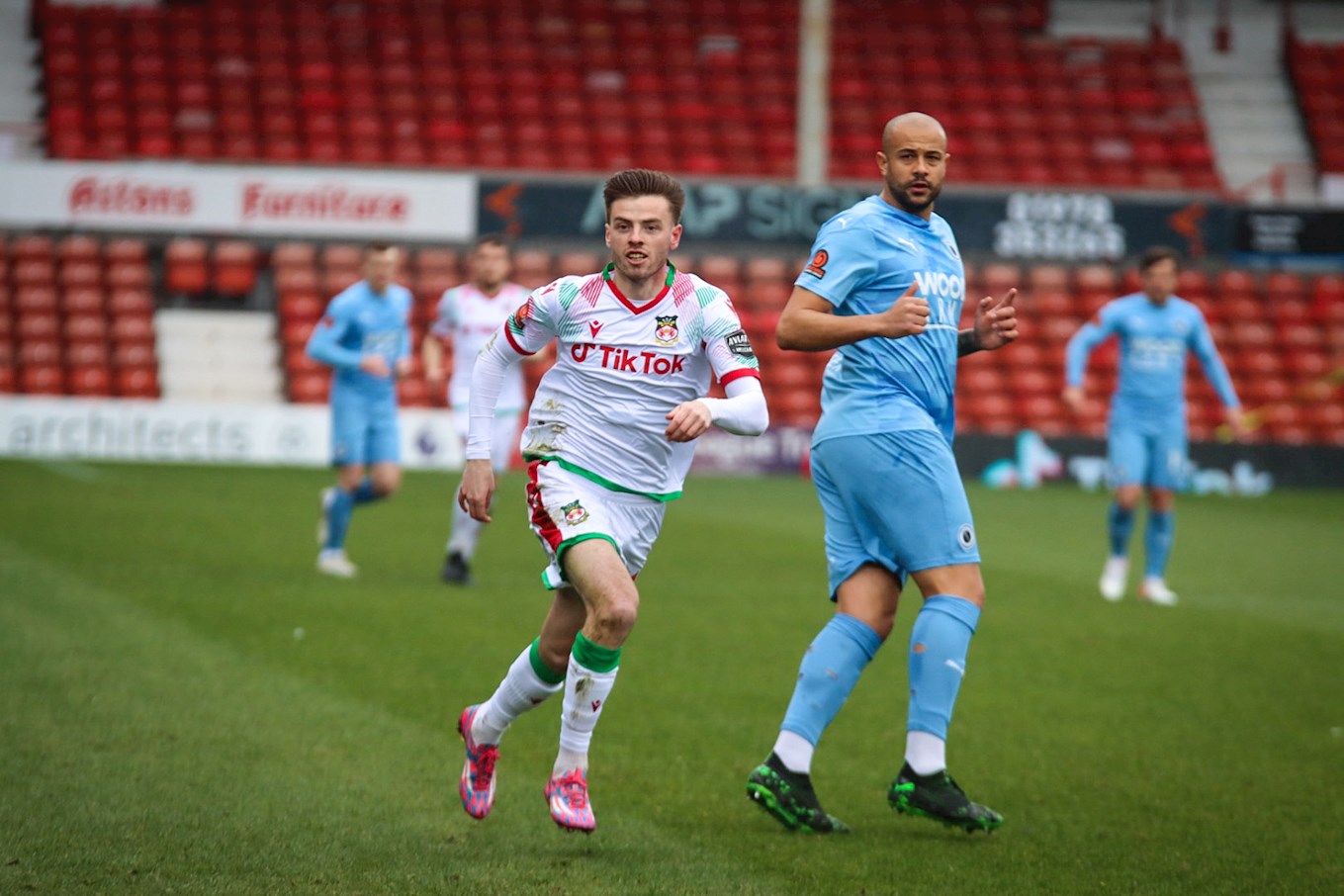 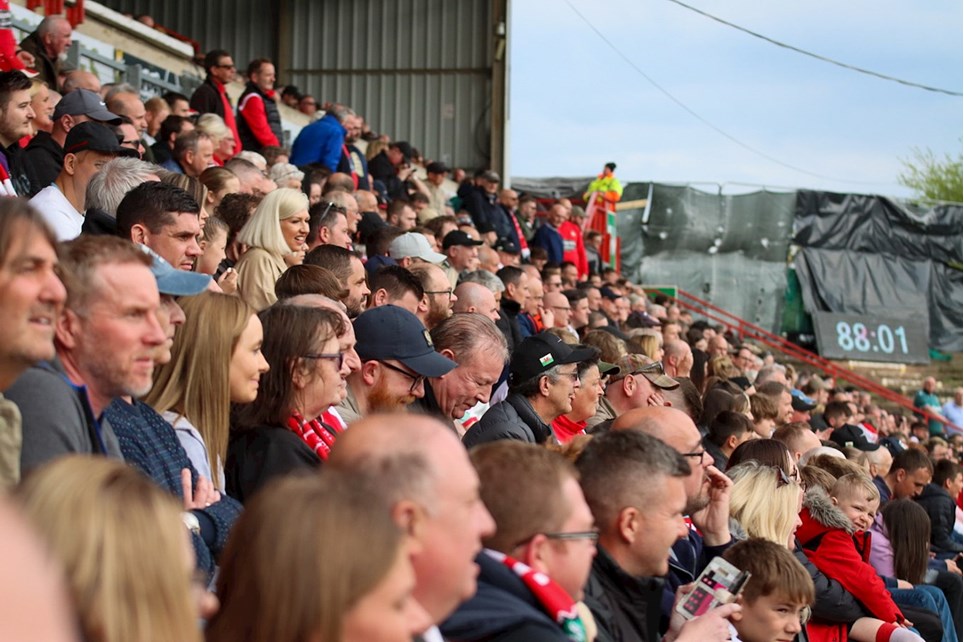 
Wrexham return to home soil after two long away trips, for our penultimate home league game of the 2021/22 season against Southend United on Saturday April 30.

Ollie Palmer’s second-half effort was the difference in a tightly contested game against a well-organised Southend side, as Wrexham ran out 1-0 winners.

Palmer took his goal well, as Jordan Davies whipped in a superb cross which the striker tucked away into the bottom corner.

It was a closely contested affair, with neither side taking control of the game, but the quality and composure from Wrexham proved to be vital.

Phil Parkinson named one change to the side that hit Weymouth for six in midweek, with Reece Hall-Johnson coming in for the injured Aaron Hayden.

The game started with both sides trying to impose their game on each other, but both were evenly matched.

The half started to finally open up with the visitors getting the first shot on goal minutes before the break, as Bridge’s chance was tamely hit at Dibble.

The Red Dragons came close to breaking the deadlock moments later with Tyler French latching onto McAlinden’s through ball, but his effort was saved well by Arnold.

Jordan Davies nearly got his 21st goal of the season as his curled shot just went wide of the Southend stoppers net.

Parkinson’s side started the second period as they did at Weymouth, and opened the scoring through Ollie Palmer, who finished cooly past Arnold.

Paul Mullin had a chance to try to double the Reds' lead in a counter-attack that saw him and Palmer marauding towards the shrimpers defence, but a rare heavy touch took it away from him.

Mullin had another opportunity to make it two, as he rose well to win a header from McAlinden’s cross, but it went just wide of the post.

Southend had their chances too, and Harry Cardwell forced Dibble into a superb save to keep Wrexham ahead.

Palmer nearly doubled his tally for the game, with an audacious strike from his own half, but his shot bounced just wide with Arnold way beaten on his way back from the corner.

Wrexham are back in action on Monday away from home against Boreham Wood!

Subs not used: Camp and Jarvis

Subs not used: Gard and White


Wrexham return to home soil after two long away trips, for our penultimate home league game of the 2021/22 season against Southend United on Saturday April 30.