Phil Parkinson's 700th league game will see him make a first visit to Grosvenor Vale, and a tough challenge awaits his Wrexham side.

Parkinson will want to see his side replicate Last Saturday's performance against Boreham Wood, when his three January captures were prominent in an emphatic 3-0 win. He'll still be without top scorer Paul Mullin, though, who is half way through his 4-match suspension.

Our three matches against Wealdstone have shown that they will be difficult opposition. The Stones returned to the fifth tier for the first time in 32 years in 2020, and after a campaign of consolidation, this season has been impressive, albeit in a low key sort of way. As Wealdstone's manager, Stuart Maynard, told his club website,

We've gone under the radar all season, we haven't gone and won five, six, seven games on the bounce which then gets highlighted, we've just slowly ticked along and that's what you've got to do, we don't need to be in the lights. We've got to keep ticking along and picking up points and that's it.

They couldn't help but grab some headlines last Saturday, though, after a terrific 3-1 win at the home of local rivals Barnet. The fixture certainly has history - it was the first one to be televised in the UK in 1946 - and The Stones turned on the magic for their travelling fans.

Sadly, a memorable win was tarnished by poor behaviour from a small group in the away end, but the club has acted with admirable swiftness and firmness to condemn such behaviour: Chairman Rory Fitzgerald issued a statement which rightly distinguished between those responsible and the true fans who have helped form the excellent reputation Wealdstone have enjoyed for many years:

As a club, the diversity of our home and away support across age, gender and race is something we are hugely proud of and we have been widely praised by our opponents throughout the season for our supporters conduct.

A large number of our following on Saturday was made up of young children who we have actively encouraged to watch their local football club through ticket and community initiatives and who enjoy the family atmosphere the club seeks to create.

We will absolutely NOT tolerate a small minority of people who associated themselves with our club for this fixture to tarnish our reputation. We apologise for their behaviour on behalf of all true Wealdstone supporters. We thank the vast, vast majority of those who travelled to support us on Saturday for their incredible support.

The Stones will be hoping to have a couple of players back in contention after injury: Ira Jackson was absent at Barnet following an injuury he received in midweek against Yeovil Town, while Nikola Tavares picked up a groin injury at Barnet and was taken off as a precaution. 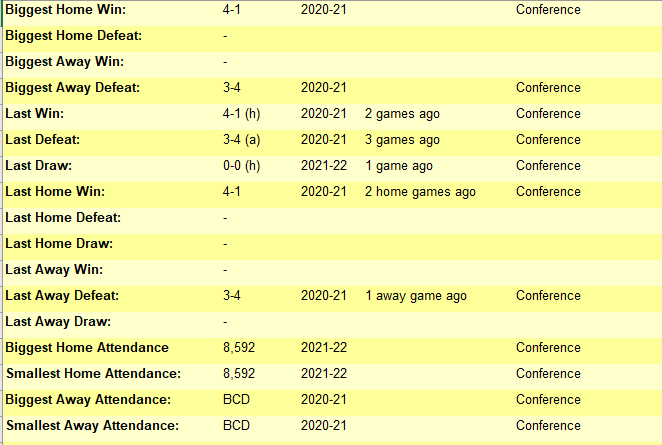 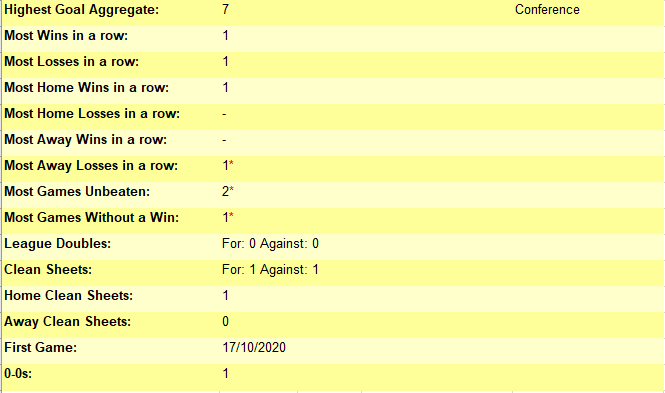 We’ve faced Wealdstone three times, and they’ve shown on each occasion that they are an extremely competitive National League side.

Our first match at Grosvenor Vale was a wild one. We went behind in the 15th minute, but equalised immediately through a bizarre own goal, sliced into the net from 15 yards.

Three minutes later, Adi Yussuf scored his first Wrexham goal and it looked like the visitors would be able to take control of the match, but within 3 minutes Jacob Mendy scored a remarkable goal from distance to equalise.

Things went from bad to worse at the start of the second half as two poorly-defended corners allowed Wealdstone to take a 4-2 lead.

Yussuf struck again in the second minute of added time, and remarkably there was still time for Fiacre Kelleher to miss an easy headed chance before the whistle finally blew on a 4-3 loss.

The Stones weren’t intimidated by their first visit to The Racecourse, and harboured hopes of a league double when they went into the break 1-0 up. However, Dean Keates’ side went through the gears in the second half to snatch the momentum away from the visitors.

Kwame Thomas equalised soon after the break, and a Luke Young goal meant we were ahead within the first ten minutes of the half. Thomas grabbed another and Dior Angus rounded off a 4-1 win.

When Wealdstone returned to The Racecourse in November last year, Wrexham had just hit a remarkable purple patch, scoring 11 goals in the course of the previous week with a 5-0 triumph at Aldershot followed by a 6-2 win at Kings Lynn.

Wealdstone proved to be made of far sterner stuff, though, and came out of the game with a point from a goalless draw. In the process they became the first side to keep a clean sheet against us all season, in our 18th game. 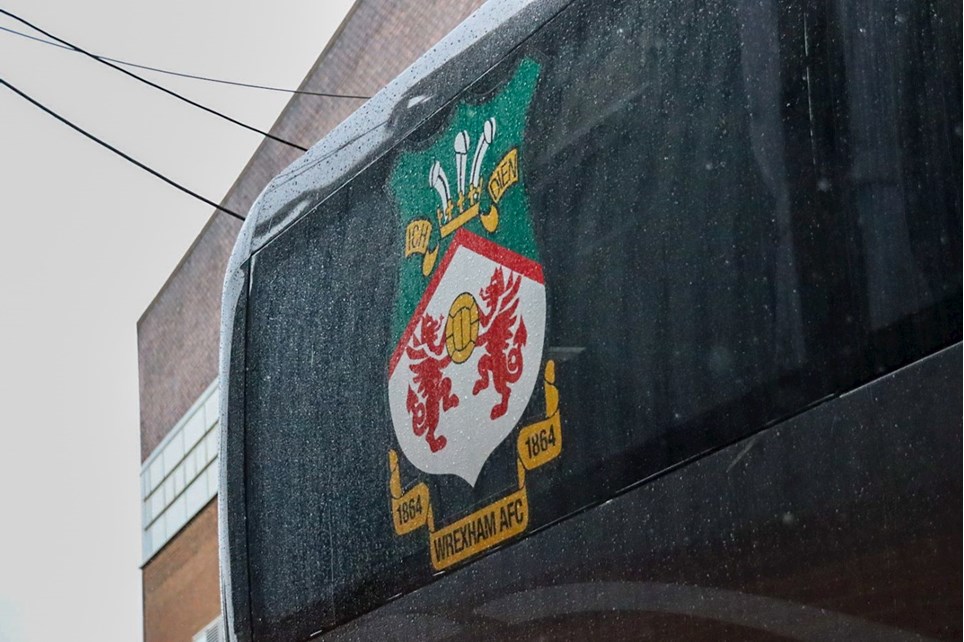 
Following discussions with Wealdstone, we can confirm that there is no pitch inspection planned at Grosvenor Vale ahead of tomorrow’s Vanarama National League fixture.

Reece Hall-Johnson scored a dramatic stoppage-time winner as Wrexham came from behind to beat ten-man Wealdstone at Grosvenor Vale.

Substitute Rhys Browne converted a penalty he won himself to put Wealdstone in front but, after Jack Cook’s second yellow card for handball, Davies curled in a brilliant equaliser.

More was to follow too as, in the final minute of stoppage time, Hall-Johnson squeezed a shot through a crowd to snatch all three points.

Wrexham started on top too, without really testing George Wickens in the Wealdstone goal.

Ollie Palmer’s high pressing then earned a free-kick in the eighth minute but, though Davies’ effort beat the wall, again it missed the target.

Wealdstone took some time to find their footing in the game, but they were able to put a couple of set pieces into the area as the clock approached 20 minutes – Wrexham clearing their lines.

Tensions ramped up on 25 minutes, when Jordan Davies was fouled and clashed with Connor McAvoy. Both players were yellow-carded but no further action was taken.

Young was next to try his luck for Wrexham from distance, after Callum McFadzean kept the ball alive with a good tackle, but the shot was just wide across goal.

Wrexham then finished the half well, but again could not text the Wealdstone goalkeeper. Hall-Johnson hit the post from a tight angle on 45 minutes, and Young then fired wide a minute later.

Neither side could break the deadlock, however, as – just like the match at the Racecourse Ground – it was all-square at half-time.

Wealdstone were straight of the blocks after the restart, and Rob Lainton parried Josh Umerah’s effort wide just seconds into the second-half.

Wrexham responded well though, and Young had a great chance to break the deadlock on 49 minutes when he found space in the area but Wickens got a hand to his low shot and it looped over.

The resultant corner was cleared, but Aaron Hayden then headed wide across goal when the ball was worked back into the area.

Callum McFadzean could only slide the ball into the side-netting on 58 minutes, from Dan Jarvis’ cross, and still Wrexham could not break through on the hour when a corner led to pinball in the area on the hour – the ball somehow staying out at the back post.

Disaster struck on 70 minutes, however, when Browne beat Lainton to a brilliant through ball, and the Wrexham goalkeeper brought him down in the area.

Browne picked himself up and slotted the penalty into the corner, despite Lainton guessing correctly to dive to his left.

Wrexham were nearly level immediately, when Jarvis chipped a cross over Wickens, but McAvoy headed clear.

Wealdstone were reduced to ten men on 86 minutes, however, when Cook handballed as Ponticelli looked to break and picked up his second yellow card.

From the resultant free-kick, Jordan Davies clattered the crossbar but the rebound came straight back to him and curled brilliantly into the top corner to level.

Six minutes were added on, and in the last of them Liam McAlinden kept the ball alive at the back post, pulled back for Hall-Johnson and the wing-back won the game for Wrexham with a shot through the crowd.


Following discussions with Wealdstone, we can confirm that there is no pitch inspection planned at Grosvenor Vale ahead of tomorrow’s Vanarama National League fixture.

Tickets for our away match against Wealdstone at Grosvenor Vale, on Saturday February 19, will be on sale via the Stones’ website on Monday February 7.

Wrexham have been allocated 900 tickets for the game – which kicks off at 3pm – including 369 seats, which will be sold on a first-come, first-served basis.

It will be the first time Wrexham have travelled to Grosvenor Vale with supporters in attendance, after a 4-3 defeat behind closed doors last season.

Away supporters have been allocated the top end of the stadium, with tickets priced as follows:

Please note, Wrexham supporters will be unable to use Wealdstone’s club house for this segregated match. Our hosts will be publishing full details on available pubs and bars, as well as parking, in due course.

Official supporter travel will also be available for this game from our own eTicketing website. Please do not book coach tickets until you have secured your match ticket for the game. Coaches will depart from the Mold Road at 08:00, and will cost £28 for adults and £26 for juniors.

Please note, supporters aged under-14 must be accompanied by an adult on all supporter coaches. Alcohol is strictly prohibited by law on away travel.