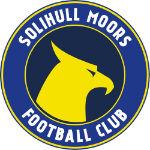 Lineup will be displayed here shortly before the game

Wrexham's hopes of an FA Cup run ended at the first hurdle, as Solihull Moors enjoyed their biggest ever victory over the Dragons.

Beset by injuries, Wrexham made three changes to the starting eleven, drafting in James Horsfield, Jordan Davies and Dan Jarvis, and could only name four players on the bench.

Despite their selection problems, the Dragons had more of the ball in the opening stages, but it was Moors who carved out the chances.

A long ball to the edge of the area found Adam Rooney, who took the ball on his chest and pivoted to shoot just wide of the right post.

Within a minute the home side threatened again: an excellent break down the right by Cameron Coxe saw him pick out ex-Dragon Kyle Storer in the area, but he pulled his shot narrowly off target.

Wrexham’s first threat came after Adi Yussuf made a nuisance of himself on the edge of the area, creating a loose ball which led to a free kick within shooting range. Luke Young’s strike was accurate, but Ryan Boot was able to get across and save comfortably.

As the half wore on, Solihull started to take control. Theo Vassell stepped up into midfield but lost the ball, and an excellent pass by Callum Maycock picked out Rooney. Fortunately for Wrexham, Fiacre Kelleher did well to stand his ground and force Rooney into a shot from the edge of the area which Lainton could parry.

Wrexham carved out a half chance when Horsfield’s far post cross dropped loose, and Jamie Reckord took on a difficult pirouetting volley while off balance, which went wide from six yards, but a more clearcut chance followed from a Solihull corner.

Kelleher did well to intercept in the goalmouth, and Elliott Durrell initiated a break by finding Yussuf. His accurate pass sent Jarvis running threateningly into the right channel. But his shot was parried by Boot.

The rain continued to lash down, and both sides became bogged down in the middle of the pitch but, in the 39th minute Solihull opened the scoring out of the blue.

An excellent Joe Sbarra pass opened Wrexham’s defence up, and although Rooney was denied by a superb recovering challenge by Davies, Sbarra followed his pass up and drove a powerful shot from the edge of the area which was deflected past Lainton.

Wrexham started the second half on the front foot but still struggled to create chances, and before long Moors took a decisive grip on the game as a two-goal burst put the tie to bed.

First, a good switch by Storer sent Jordan Cranston away. He fed Mitch Hancox, overtapping from the left-sided centreback position, and Durrell tripped him. Rooney stepped up, drove the ball into the bottom left corner, and promptly went off injured.

His departure would not provie respite for the Wrexham defence as his replacement, Cameron Archer, made it 3-0 within 3 minutes of his arrival.

A ball down the right sent Archer away, and he held off Vassell before chipping calmly over Lainton.

Five minutes later, Archer threatened to score a second. Bursting down the left channel, he beat Kelleher but Lainton spread himself well to block the shot from close range.

Wrexham tried to change things up, with Kwame Thomas coming on for Dan Jarvis and Reece Hall -Johnson replacing Horsfield, but it was Solihull who would score a fourth with 14 minutes left.

Reckord’s pass to Harris was intercepted by Callum Maycock, who fed Jimmy Ball. He seemed to lose his balance in the wet penalty area but, squared across the face of goal for Sbarra to tap in his second goal.

Wrexham tried to rally but the tie was gone. Indeed, Archer could have made it five in added time as he broke clear into the right channel again, but Lainton stood up well to block the shot.