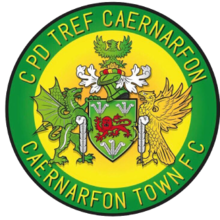 Wrexham AFC Youth exited their second cup competition in the space of four days and once again on penalties as they couldn't find a way past Caernarfon Town.

Dan Nolan's Wrexham - who had beat Ruthin Town 13-1 before recieving a bye - originally drew the Cofi's at home before the match was switched to the Oval.

A late Dan Jones strike wasn't enough as Wrexham missed twice in the shoot-out to send Caernarfon through.

Nolan made one change from the side that made a shock exit to AFC Blackpool on Thursday as Harry Bell came in for Owen Cushion.

Owen Tomlinson opened the scoring on 24 minutes before Kai Evans hit an almost immedite reply. Evans more than made up from the stunning goal he'd scored on 11 minutes that was dubiously chalked off for offside.

Evans had a second moments later after capitlising from a mistake at the back to turn the game on it's head just after the half-hour mark.

However, Caernarfon weren't finished in the first half goal flurry as Fabrizio Murtas and Gruffydd Jones gave the home side the lead at the break.

Caernarfon started the second period the better of the two sides forcing goalkeeper Louis Parr into a string of fine stops.

Rowan Davies came up with the defensive heroics on 57 minutes as the centre-half made a goal saving challenge just in front of the six yard box to deny.

Captain Tom Jenkins was kept busy in the middle as Wrexham searched for a leveller, firstly beginning a great move from a quick free-kick but his cross couldn't get the decisive touch as it flashed across goal.

On 66 minutes he hit a low drive from the edge of the box that kissed the outside of the post.

Wrexham well and truly stepped it up in the final 20 minutes with a series of oppurtunities. Jones did well down the right channel before pulling the trigger, only for it to be deflected into the side netting.

The visitors passing and movement became more fluid as time went on with Will Mountfield blazing over after a great move. It looked like it wouldn't be Wrexham's day when Jones crashed the ball against the crossbar with nine left to play.

However, Nolan's side's moment did come, as Jones hit a fierce effort from distance on the turn into the bottom corner to level on 87 minutes.

Penalties would be needed to decide the outcome as it had been for the FA Youth Cup tie four days previous. Jenkins scored before Jones hit the ball over the bar. Jones had been ordered to re-take his initial effort that was saved by the keeper who was adjudged to have been off his line.

Mountfield scored as Caernarfon made no mistakes and after Evans also smashed the ball over the bar it was down to a final Cofi penalty which they duly dispatched to progress.

Man of the Match: Aaron James