If you look up “cult hero” in a dictionary, there’s no definition: just a picture of Emad Bouanane. 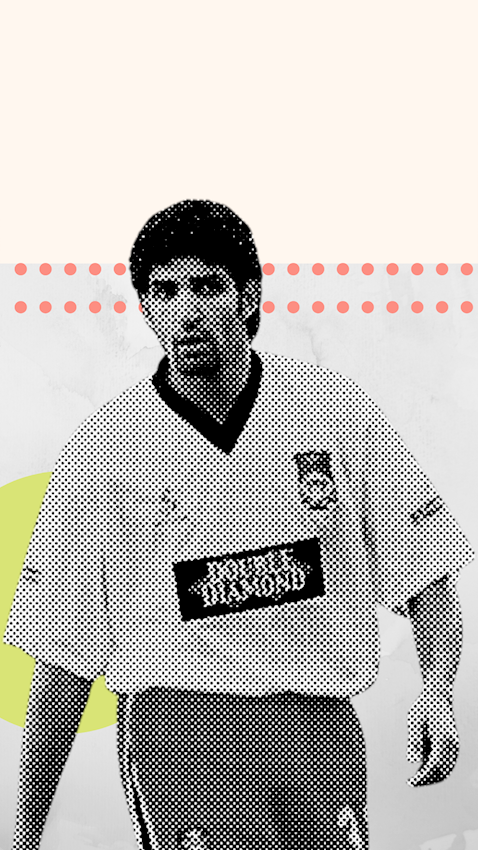 Could anybody, in the long history of this football club, have encapsulated the notion of a cult hero quite as succinctly as Emad? The very fact that I use his first name to describe him rather than call him Bouanane says everything. Like Madonna, Elvis and post-divorce Cheryl, he needs no surname. There’s only one Emad.

Of course, he doesn’t stand out for his genius, long service or honours. Frankly, he brought none of those to the table. His was a brief sojourn at The Racecourse, which managed to be unremarkable in terms of achievements, but highly memorable for anyone who actually witnessed him, either on or off the pitch. Emad wasn’t necessarily much of a footballer, but he was still pure gold.

To start at the beginning, which seems an inappropriately logical approach to describing Emad’s scatty Wrexham career, he seemed to come from nowhere. A French-Moroccan triallist who immediately caught the eye with his enthusiastic verve as he careered in an untutored manner down the left flank. He looked like he’d come straight off the schoolyard and had never played in a team before, but he certainly had something.

He earned himself a contract as Brian Flynn backed his gut. Bouanane had raw pace in abundance, could beat a man and barrelled up and down the pitch like an eager Golden Retriever. It wasn’t always apparent where he was going, and he often never got there, but just watching the journey could be exhilarating, not to mention exhausting.

I’m aware that I might be creating a negative impression of his talents here, and if that’s so I promise that isn’t my intention. Indeed, I feel that in some ways he was a great missed opportunity. Here was a player with remarkable attributes who appeared to lack any real knowledge of how to play in a team. If he could have been tutored, he might just have turned into something special, although by the same token, over-coaching might have tamed the beast within which made him so exciting. Anyway, it’s fair to say that, like the wild horses of the Camargue, he simply couldn’t be trained.

His timing was unfortunate too. If he’d been around ten years later he’d surely have been a major player in a weaker Wrexham side.

Bouanane was a loveable juxtaposition to the growing culture of wealth and hubris which was drifting into the lives of professional footballers at the time as well. Nothing encapsulates that better than a brief, meaningless incident which sticks in my head after some nondescript night game. Walking across a dark Yale Stand car park I jumped out of my skin as suddenly and engine roared behind me and a horn sounded: it was Darren Ferguson heading home in his BMW. Seconds later I was beeped at again, but this time it was Emad, waving feverishly to me as he hung out of the driver’s window of a battered lime green Volkswagen which, if I recall correctly (I might have romanticised this next detail!) had a headlight hanging out and the look of  a clown car! 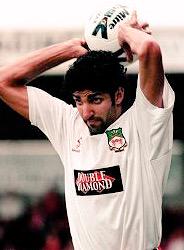 He was a charming character with a little hint of mischief about him. When he was on trial at the club I would attempt the odd interview with him, utilising my schoolboy French. Before long our conversations switched to English as he picked up the language very quickly, but he was reluctant to let on to the press!

This led to some wonderfully entertaining post-match exchanges as he pretended not to understand what was being said to him!

One such occasion was an attempt to clear up if he’d been booked or not, as a reporter (not one of the present press pack, I should point out) tried to get some sense out of him by attempting every euphemism available to him:

Reporter: Were you booked?

Reporter: Did you receive a booking?

Emad (grinning over the reporter’s shoulder at me): No understand.

Reporter: Were you cautioned?

Emad: Eh? (I’m struggling to keep a straight face now. Emad’s pulling it off to perfection)

Flynn decided that Bouanane’s attributes best suited him to the role of attacking full back. With his exact opposite, the eternally reliable Phil Hardy, already ensconced in that position, Flynn might have calculated that he’d have time to work on his Frankenstein’s Monster project in the reserves, as he wasn’t likely to have to fall back on Bouanane too often. However, Hardy picked up a rare injury, and Bouanane found himself in the first team. Now the fun would truly begin.

You had to be there to experience the thrill in the crowd when Bouanane set off on one of his trademark charges up the pitch. Wiser eyes in the crowd would also be aware of the concern emanating from the rest of the back four, abandoned and pining for Hardy, a man whose forward forays were carefully rationed and only undertaken after a full risk assessment had ascertained that there was no danger of a harmful counter attack.

Still, Emad’s bursts up the pitch were memorable. They never actually led to anything, but they were memorable. A run at Swindon encapsulated the man. He picked the ball up forty yards out on the left and, naturally, headed at full pelt straight towards the heavily congested heart of the home team’s defence.

Seconds later, after some high speed slaloming which defied belief, he’d somehow weaved his way through the Swindon backline like Archie Gemmill on fast forward (kids, ask your History teacher.)

The terrified keeper, left totally exposed, ventured timidly off his line, but the speed with which Bouanane had burst through left him out of position, with no time to narrow the angle: Bouanane had virtually the whole goal to aim at.

Naturally, he leaned back and slammed it over the stand.

He never actually scored for Wrexham, his promise outweighing his concrete achievements. In the end the harsh reality of his defensive naïveté caught up with him. Etched into my mind is an image from Boundary Park. Oldham were in the process of destroying us 5-1 – centre forward Carlo Corazzin would score four and miss a penalty – and centre backs Brian Carey and Mark McGregor were, on the face of it, having a nightmare. Except the problem wasn’t actually them: Bouanane was playing at left-back. Sort of. In reality he was indulging in a freeform interpretation of the left back role which entailed following the ball around the left flank until he got bored, like a cat chasing a ball of wool.

But back to that image that has fixed itself into my mind’s eye. Oldham have just scored. McGregor has been pulled horribly out of position, trying to be a left back and a centre back at the same time, and been exposed. Of all the unmarked Oldham players racing into the box, Corazzin got to the ball first to tap it home from close range.

As the Athletic players wheel around in celebration, McGregor is screaming his fury at Bouanane. The target of his ire is standing miles away, hands on hips on the half way line, looking nonplussed as if the whole mess in his side’s penalty area is none of his business. He never played for us again. Which is a shame. I think.