Dan Nolan’s young Red Dragons came from behind to beat Cymru North side Holywell Town, who themselves enjoyed a win over Caernarfon Town at the weekend.

After turning round and trailing by the only goal of the first half, it was a different story after the break, as Wrexham stormed back to grab three goals through Connor Ross, Dan Jones and Jacob Milner, and earn victory.

With a number of games already under their belt, the Wellman certainly started fast and pinned the visitors back in their own penalty area for long periods.

Indeed, Wrexham had keeper Louis Parr to thank for keeping Holywell at bay, as he produced a series of saves to deny the home strikers.

The first real chance of the game fell to former Wrexham youngster Dylan Allshorn, but his effort was parried away for a corner by the keeper. From the resulting corner, Zebb Edwards' (younger brother of Kai Edwards) effort was well saved by Parr.

Coming up to 20 minutes played and the score remained goalless, as Holywell went close through Ollie Buckley but his effort was inches wide of the post, and Wrexham saw a shot fly inches over the crossbar.

The deadlock was broken on 31 minutes, however, as after an initial shot was deflected high into the sky, the ball fell for Danny Andrews, to try a bicycle kick that put Holywell ahead.

Coming up to half-time and the Wellmen nearly doubled their lead as Buckley’s fierce drive was beaten away by the Wrexham keeper, while the visitors also went close as a shot flew inches wide of the target.

Dan Nolan made a couple of changes at the break, and Wrexham were level just five minutes after the restart – Connor Ross finishing at the back post from a low cross.

Wrexham were gaining the upper hand as the minutes ticked on and substitute Dan Jones beat the offside trap, to advance on the home goal and fire his team in front on 65 minutes.

While Holywell were hitting long balls to wide men, the young Wrexham defence was doing their job and keeping the home forwards away from the danger zone.

This allowed another breakaway on 75 minutes to bring a third goal for Wrexham, as Jones drew his man before slipping a pass through to Jacob Milner, who crashed the ball home to secure the victory. 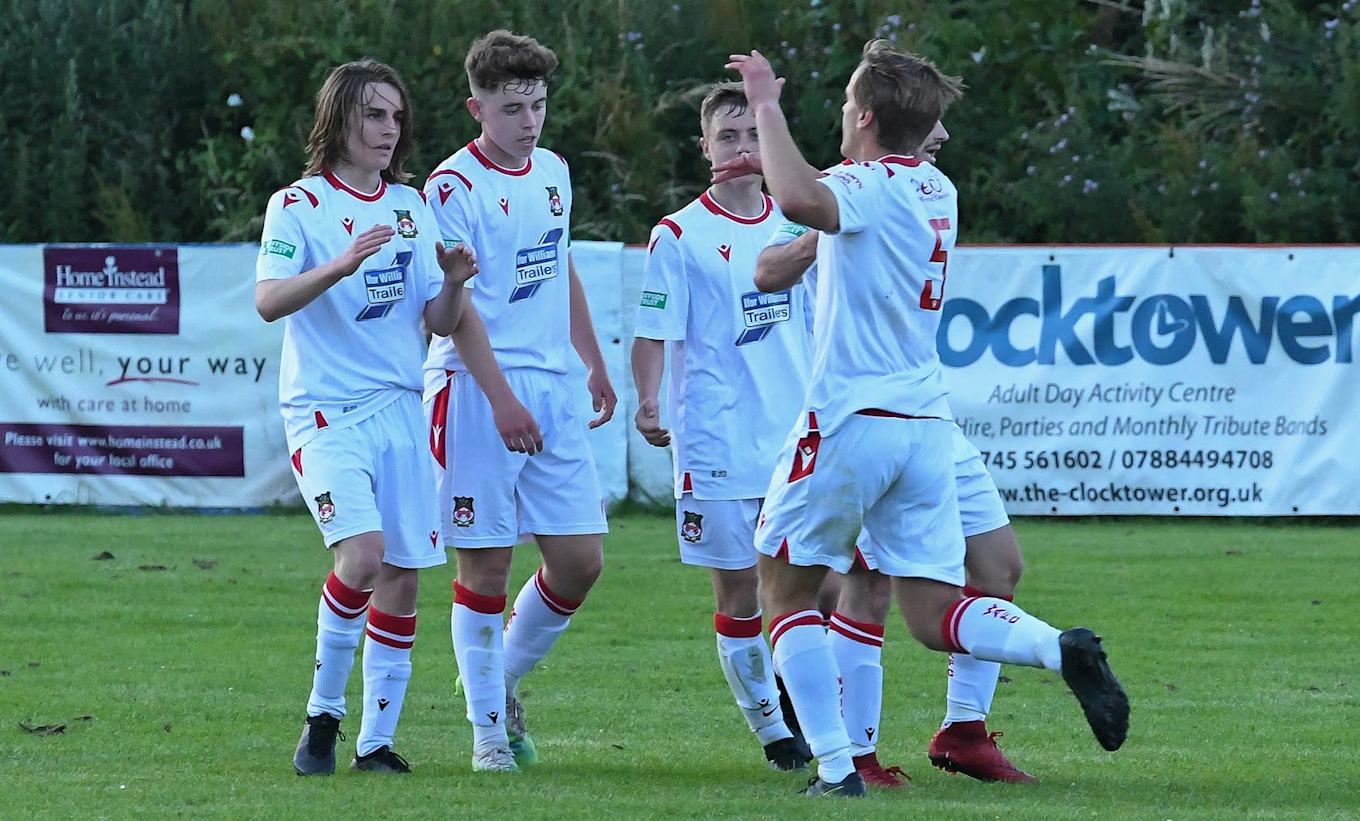 Wrexham nearly increased their lead with 10 minutes remaining, as Milner's effort beat the advancing keeper, but with the ball heading into the net, Edwards ran back to clear off his own line.

From a Holywell corner, Ash Davies rose high to head the ball towards goal but it was blocked at the foot of the post and from the resulting scramble, no home player was able to poke it home.

The match referee brought the game to an end when Allshorn landed awkwardly on his ankle in front of the dugouts and, after prolonged treatment, was carried from the pitch on a stretcher. We wish the Holywell winger well and a speedy recovery.

As for the display, Nolan will be satisfied with his team's performance in the second half, against a decent side that will be looking to challenge for honours in their league and are already five or six games into their schedule.