He was the international team mate of Samuel Eto’o, while playing for us in the fifth level of the English pyramid. Such a vast discrepancy of experience isn't all that unusual in African national squads: think of Emanuel Adebayor with Togo, or George Weah with Liberia. Africa Cup of Nations squads frequently feature unattached players who hadn't had a club since the start of the season alongside global superstars. But somehow Joslain Mayebi epitomised something more subtle. He wasn't a tourist, out of his depth in an international squad; he was an agile genius, hampered by an ability to attract misfortune. 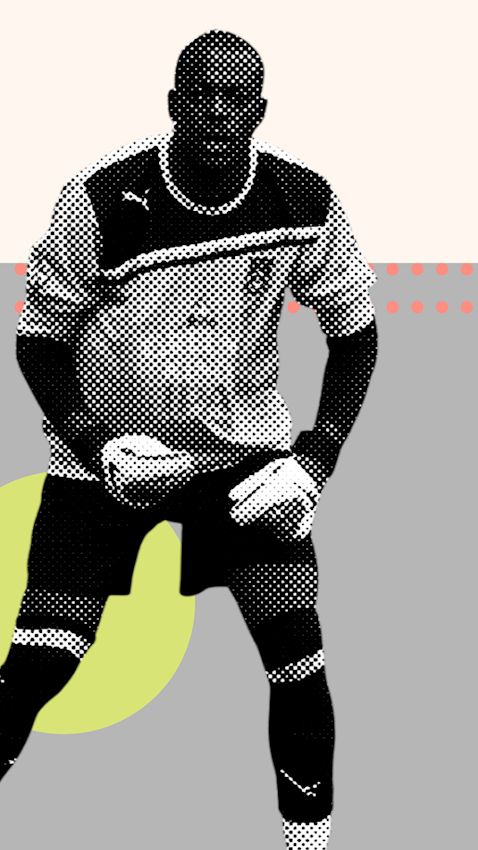 Joslain Mayebi, Wrexham and Cameroon. He had non-playing experience in the 2008 Olympics  and played in the Israeli top division under John Gregory. Before arriving in North Wales he'd already gained YouTube notoriety for that freak football staple - the goalkeeper going up for a corner in injury time and scoring an equaliser! Joslain Mayebi: novelty goalkeeper.

But he was far more than that. He arrived at Wrexham half way through the 2010-11 season and spent the remainder of the campaign on the bench, putting in some erratic performances for the reserves which concerned some observers.

However, a debut in a dead rubber on the last day of the season saw him turn in a superb performance in a 1-1 draw at Luton. It was a match in which he showed all his strengths to perfection as he pulled off a series of acrobatic saves and was only beaten by a late penalty, although he also showcased his erratic side when he attacked an early high ball into the box in a reckless manner and ended up injuring his side's play-maker, Lee Fowler, who was getting pitch time in order to be ready for the upcoming play-offs. The pattern was established: with his talent came risk.

Shortly into the following season, with Wrexham top of the table, Mayebi took the goalkeeper's jersey after the first choice, Chris Maxwell, was called up for international duty. He held onto his place, provoking some debate amongst supporters,

The matter of who was our number-one keeper split the fans and the debate escalated after a 3-1 defeat at Barrow. Maxwell had given an interview in which he said he wanted his shirt back: his comments were innocent enough, but were not taken that way by manager Dean Saunders. The manager responded to what he took to be a challenge to his authority by selecting Mayebi for the loss at Holker Street, and refusing to confer any blame to the keeper for the defeat, although in truth Mayebi had suffered an unhappy afternoon.

So Mayebi, unwittingly thrown into a dispute, took advantage of his manager's faith, and that of Saunders' successor, Andy Morrell. He grew into the role, showing not only that he had athleticism when it came to dealing with shots, but also that he was confident in the air, committing to attacking everything he could in his area and showing an increasing assuredness with his handling.

His bouncy style and remarkably long reach on the stretch were real attributes, but they masked technical short comings. The exaggerated way he kept on his toes when danger was imminent helped him to take off, but could also mean his feet were off the ground when a shot came in, meaning he was unable to change direction easily, and movement in the air could cause problems if he was already in the air trying to get behind a straight shot for the same reason. Having said that, his superior reflexes and good hands often allowed him to compensate for this, even if it sometimes meant his arms got twisted out of what would be an orthodox catching shape.

He was the opposite of Maxwell, a compact, technically neat goalkeeper. That contrast simply fuelled the division between their supporters further: did you enjoy the polished reassurance of Maxwell, or yearn for the excitement of living on the edge, teetering like Homer Simpson between exhilaration and terror.

As Wrexham pushed on to a tally of 98 points, coming second in the division and losing out in the play-offs, plus enjoying an FA Cup run to the third round, Mayebi was an eye-catching figure. A solid clean sheet away to Brentford,  two divisions higher in League One, followed up by two good displays against Championship Brighton suggested the big occasion held no fears for him, and his bizarre antics in the subsequent penalty shoot-out against The Seagulls, bouncing up and down with his arms windmilling, like Tigger possessed by the spirit of Bruce Grobbelaar, to try to put the takers off, served to further establish his cult hero credentials. Pity he couldn't actually get a hand onto any of the penalties as Wrexham went out 5-4!

Not that his rise to undisputed number one as the season wore on wasn't without its hiccups. His run in the team can be characterised by one of long spells of solidity punctuated by spectacular aberrations. At Mansfield he conceded a goal directly from opposing goalkeeper Alan Marriott's kick, at Cambridge he spilled an injury time catch to concede an equaliser in an FA Cup tie, and at Ebbsfleet he caught a routine ball under no pressure and, seemingly looking to release it quickly in the same movement, somehow squirted it straight to a striker who couldn't believe his luck as he cashed in.

Maxwell moved on and Mayebi remained as undisputed first choice. Again, Morrell's side mounted a robust push for promotion, with his front foot approach to goalkeeping helping the defence to compensate for the shattering blow of losing Mark Creighton in the third match of the season.

However, as the campaign wore on, Mayebi's fortunes diminshed. Opposing players found they could provoke him and draw a rush of blood. Against Hyde, Mayebi caught a low cross, felt he'd been kicked as he went down, and leaped up with the ball in his hands, rushing to the perpetrator and seeming to head butt him. The crowd assumed the referee would give a penalty and send the keeper off, but remarkably he stopped play, delivered admonishments and allowed Mayebi to restart. Scrutiny of the match video suggested the referee had blown as he saw Mayebi run towards the Hyde player, and that he didn't actually butt him, although he certainly charged aggressively at him (and the initial contact on the keeper was minimal too).

He might have got away with that one, but he didn't two months later when he caught a corner against Alfreton and then seemed to swing an elbow at an opponent, again with the ball safely in his arms. This time the referee pulled out a straight red card and awarded a penalty, as a 1-1 draw which Wrexham were dominating (they'd only conceded because Mayebi spilled a weak free kick) turned on that incident into a 4-2 defeat. The video replay was less conclusive in this case, although Wrexham appealed unsuccessfully on the basis that he was merely freeing his arm from an opponent's clutches, However, a bizarre pattern had been established. When have you ever seen a keeper concede a penalty when he has the ball in his hands? Yet Mayebi could easily have done it twice!

The real damage was done when the achilles injury which he'd been nursing finally got the better of him. Morrell acted swiftly, bringing Maxwell back on loam, and it was he who won an FA Trophy winner's medal and took Wrexham to the play-off final, with the injured Mayebi watching on.

He remained at the club the following season, but the injury was a problem which wouldn't go away. With the transfer budget slashed, Morrell's squad had nowhere near as much quality as in the previous two seasons, and was destined for a finish at the bottom end of mid-table.

Mayebi began as first choice, but was kept a lot busier than in the last two campaigns. He wasn't helped initially by his partnership with compatriot Junior Ntame, who might have been a good friend off the pitch, but was not a reliable centre back on it! His achilles injury soon flared up again and Mayebi started to struggle. A return to the side against Gateshead ended in a magnificent 3-2 win, but Mayebi clearly wasn't fit, and conceded a horrible early goal. After Morrell departed, new manager Kevin WIlkin gave him another chance, but it was clear he still wasn't anywhere near 100%, and he was released in the summer, as Wilkin chose to retain the more prosaic Andy Coughlin instead.

It was a sad end for a player who still professes a deep love for the club.

While he seems to epitomise the sort of player who contributed much more than mere figures to the team, the truth is that his numbers are superb. In terms of goals conceded per game, he is currently the third best goalkeeper in Wrexham's history. For a spell he was number one, but that position is now occupied by Maxwell.When the story of our National League years is finally written, Mayebi will clearly shine as one of our brightest and most loved characters.