Obviously, it was Rob McElhenney’s roots which led to us arranging a friendly in Philadelphia, but that isn’t the only link we have with the Union. Featured in their squad is an experienced French defender whose brief spell at Wrexham made a real impression. However, I don’t think anybody foresaw the impact he’d have once he left!

He only played thirteen games for Wrexham, in the lowest level we’d ever appeared in, but Aurelien Collin might just be the biggest cult hero we’ve fielded since the 1980s. 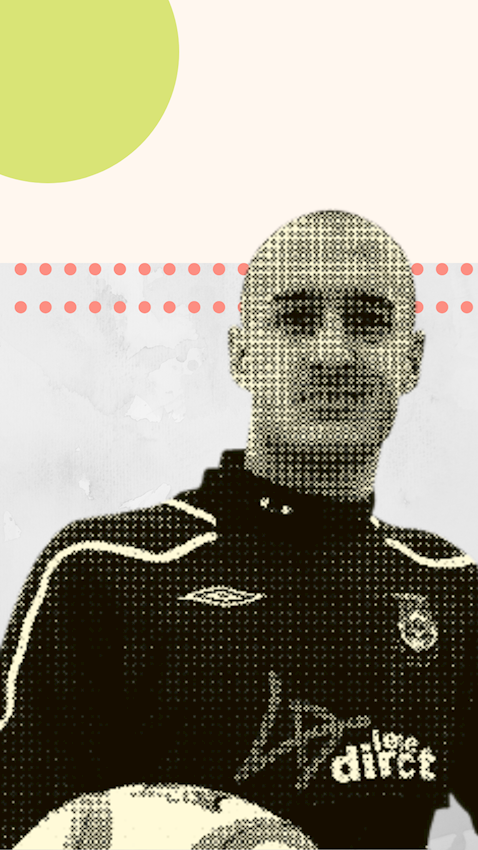 Not that he had much chance to attract such status with us, of course. He was a solid-looking centre back who arrived unheralded at the end of Dean Saunders’ first season at the helm, and his timing was pretty lousy.

He turned up just in time to take part in the depressing conclusion to that campaign, as a side which had looked like it was going to challenge in the play-offs, and even travelled to Burton in March with hopes of a late tilt at the title, staggered over the finishing line in tenth place.

He was big, mobile, two-footed and not scared of a hard tackle, but his debut was rather inauspicious: a dreadful FA Trophy quarter final with Ebbsfleet which saw him have a torrid first half as the right-sided centre-back with an uncomfortable Christian Gyan outside him. Gyan was substituted at half time and Collin’s contribution was cut short by a red card for a professional foul on Michael Gash in the second half.

Perhaps he ought to have been a little more scared: after two games as an unused sub he made his Wrexham debut in an FA Trophy quarter final against Ebbsfleet – and was sent off!

He had an unhappy final home game too: Altrincham were one of the first in a series of non-league clubs which turned up at The Racecourse with no history of ever being anywhere near Wrexham’s level in the game and departed with the three points, delivering a slap across the chops of Dragons fans to remind them of how far their club had plummeted. (Alfreton come to mind for some reason!)

Collin’s role in the defeat was pretty decisive too, as he stooped to head the ball beyond debutant Chris Maxwell to score the only goal of the game! Have a look at the match report and it’s pretty clear that the young keeper wasn’t the one getting the blame for that one!

In fact, Collin’s time with the club, on the face of it, was a pretty miserable one. He was on the winning side just once, against Northwich Victoria who were relegated by quite a margin, and tasted defeat eight times! But you don’t measure cult heroes in figures.

Collin wasn’t at fault in those games; in fact he was one of the bright spots in n horrendous run-in to the merciful release of the close season. It wasn’t his fault that the strikers failed to score in ten of those thirteen games (including the last eight matches, remarkably!) He looked polished at the back, commanding and assured apart from that ropey debut.

Results were poor at the end of that season: we may have forgotten just how badly we tailed off. In our final 19 matches we lost 10 and won just 3 – one of those victories was a last day win over a very weak Weymouth side who were already relegated and had lost most of their players due to financial problems!

We were terribly blunt up front, the loss of Marc Williams through injury completely hobbling our attack. However, Collin still impressed as the defence held pretty firm. We conceded 11 goals in the 983 minutes he was on the pitch – that’s essentially an average of a goal every match. Not bad for a struggling team.

However, he turned down Saunders' offer of a contract. He was solid and tidy on the ball but probably not irreplaceable. The excellent defensive unit Saunders did build over the next three years, and the remarkable record they accumulated, are evidence that his departure wasn't exactly earth-shattering for the manager either.

Saunders shipped plenty of players out that Summer, but he wanted to keep Collin. However, the Frenchman had done enough to earn himself a better offer, albeit the first of two which make me ask myself where the Conference actually fits into the global scheme of things. He signed for Vitoria Setubel in the top division of Portuguese football, and enjoyed two seasons in their first team, starting more games than he missed. What that tells us about the standard of football in the National League is a different but very interesting question.

His next move offered the possibility of another new adventure. Sporting Kansas City were convinced that a solid quarter of a season in the fifth tier of English football was just what an MLS centre back needs in preparation for marking Thierry Henry and Landon Donovan! And they were right!

They took him across the Atlantic and again he was a success, a regular in the best defence in the MLS as they just missed out in the play-offs, but did pick up an Open Cup winner’s medal.

It’s an environment that suited him. There’s plenty of sniffy snobbery in Britain about the MLS but the football is competitive and the soil is rich for a charismatic character like Collin. MLS fan culture is fascinatingly vibrant: part of this seems to come from the fact that there are plenty of hard core fans of the game over there who have latched keenly onto the opportunity to support a local side once the playing standards rose; also, in a relatively new league, a clean slate allowed supporters to cherry pick the best parts of fandom from Europe and South America while rejecting the darker elements.

C is for Collin, he’s good enough for me CLAP CLAP

C is for Collin, he’s good enough for me CLAP CLAP

C is for Collin, he’s GOOD enough for me OHHHHHHHH

The fans loved him, and Collin didn’t just earn their devotion with his performances and by giving his shirt to a fan after every game. He cemented it with his ability to oblige away from the pitch.

The result? The magnificent Collin’s Corner on Youtube, in which he plays the comically suave French stereotype to perfection, sipping high energy drinks from a wineglass while offering lifestyle tips to his team mates. The watercooler moment comes at the end of the second instalment, when he announces “I cannot disrespect ze cat”, a phrase quickly latched upon by a group that embodies the healthy state of fandom in the USA – South Stand SC, who are sold t-shirts commemorating the moment!

Collin might have missed out on being part of Saunders' miserly back four but he became part of another rock solid defensive unit. Built on an excellent record at the back, Sporting Kansas City were regular challengers for the title and Collin was at the heart of it. Indeed, he established himself as one of the best defenders in a league which has grown spectacularly in confidence and reputation over the last decade.

His first season saw him earn an Open Cup winners medal as he was named in the MLS Best XI, but his progress reached a glorious culmination when SKC hosting the MLS final against Real Salt Lake. Sporting fell behind but Collin intervened to score the goal which took the game to penalties.

That was when the fun really began.

In a shoot-out notable for the chunkiness of the keepers and the remarkable number of bearded players stepping up to the mark, both sides were impressive from the spot until it actually counted for something. Both teams missed kicks which would have won the title, and the shoot-out went into sudden death and beyond.

Collin might have been hiding behind his team mates, praying that it wouldn't fall to him to take a kick but as the shoot-out dragged on the list of possibilities was being slowly exhausted. Finally it came down to the tenth penalty taker: either Collin or his keeper.

Collin stepped up and confidently slotted the penalty inside the right post, possibly the best kick of the lot. Then up stepped Real's most reluctant kicker and he rattled the bar. Collin had won the cup, and walked away with the MVP award.

A year later he moved to Orlando City and repeated a trick he learned at Wrexham: he was sent off on his debut. It was a sign of how he’d moved up in the world that this time the player he fouled wasn’t Michael Gash, but World Cup winner David Villa!

Collin was an MLS All-Star in 2012, 2013 and 2014 to boot, and after three seasons at New York Red Bulls, with whom he won the Supporters Shield, Collin ended up in Philadelphia. Wearing the 78 shirt, the 35-year old has played a greater role off the pitch than on, trusted by the coaching staff with helping to bring young players through the system.

He might not have been at Wrexham long, but he’s one of the most significant players to have represented us since we dropped into the National League. You can ask yourself what might have been if he’d accepted that contract offer from Saunders, but you cannot disrespect ze centre back!