Football is littered with idiosyncratic players and peculiar stories. Bonds are formed and severed by the most unusual, and often trivial, circumstances. A lifetime connection to a town can be created simply because you showed a bit of flair or heart when it mattered. More often, lives are shaped when those characteristics are shown when it simply doesn’t matter at all.

Today’s subject had the most peculiar of relationships with Wrexham. There’s absolutely no question that he made a massive contribution to the club in the latter half of the Twentieth Century, but he’s also a genuine club icon at Chester. He made the record books on the pitch for us, but played just one game in a Wrexham shirt, and even that was an accident.

Cefn Mawr-born Ken Roberts’ entry as a player in Wrexham’s history is fleeting but notable: in September 1951 he became the youngest player to appear in the Football League when he played for us at Bradford Park Avenue. 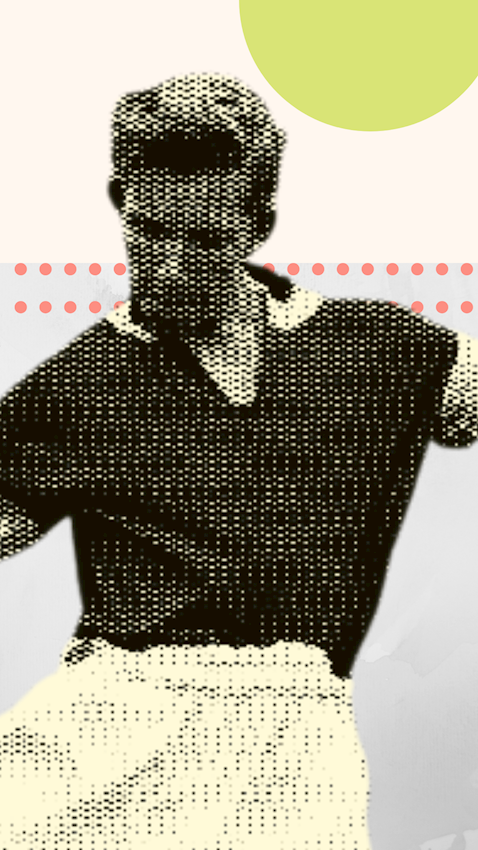 The circumstances were rather peculiar: the fifteen-year-old Roberts was merely there as an apprentice, but when a player missed his train to the match, Roberts was unexpectedly thrown into the fray! It would prove to be a chastening experience as Wrexham lost 5-0!

On taking the pitch at Bradford, Roberts, at 15 years and 158 days, equalled the record set by Albert Geldard in 1929, ironically for Bradford Park Avenue. Unsurprisingly considering the circumstances of his debut, Roberts immediately retreated from the first team set-up, and he never made another appearance for Wrexham.

That certainly wasn’t the end of his playing career though, nor his link with Wrexham. Two years after his debut he was picked up by Aston Villa, and played 38 games on the wing for the Birmingham giants, scoring three times before picking up a knee injury at Old Trafford which, ironically, cut short a career which had started so early. An attempt to return to the pitch at Oswestry Town sadly ended in failure.

Roberts loved sport though – apart from football he was a keen golfer and bowler, and even ran the North Wales Regional Tennis Centre for a while – so his misfortunate wasn’t about to curtail his involvement in the game.

He returned to The Racecourse as first team coach under former Villa team mate, Ken Barnes, and would help Wrexham to our first ever promotion before the duo left four years later.

You just couldn’t keep Roberts away from the place though! Within twelve months he’d returned as coach and chief scout under Jack Rowley, who took Roberts with him when he decamped two years later to, of all places, Bradford Park Avenue.

He became manager of Chester City in 1968 and achieved great things in his 8 years in charge. The Seals were promoted from the Fourth Division – their first ever promotion - and reached a Welsh Cup final under his avuncular command, but those landmarks were overshadowed in 1975 when Roberts steered them to the greatest achievement in their history.

City reached the last 16 of the League Cup, where they battered the formidable Football League champions Leeds United 3-0. They then went on to beat Newcastle United in the quarter-finals after forcing a draw at St James Park, and drew Roberts’ old team, Aston Villa, in the two-legged semi-final.

The home leg ended 2-2, and Chester had chances to take control of the second game, which also stood at 2-2 in the dying moments. It was then that future Wrexham boss Brian Little popped up with a dramatic winner, condemning The Seals to a 5-4 aggregate defeat as Wembley beckoned.

Roberts’ work at Chester went beyond those achievements though. He worked tirelessly on recruitment and youth development, famously arranging family holidays near football matches so he could do some scouting, and those qualities were to be crucial when he returned to The Racecourse for a third spell on the coaching staff as the club adapted to the slide down the divisions, unearthing local talent in a period of financial hardship.

A sporting obsessive, Roberts just couldn’t tear himself away from the game. Despite having decided to end his involvement with football, he was cajoled into working as a scout for Shrewsbury by one of the players he helped to develop, Kevin Ratcliffe. He repaid Ratcliffe’s faith with typical thoroughness, unearthing Joe Hart and Dave Edwards in a schoolboy match between Cheshire and Shropshire at King’s School.

Roberts’ Football League record stood for fifty-seven years, before it was finally broken by Barnsley’s Reuben Noble-Lazarus when he came on as a substitute for four minutes against Ipswich.

Roberts remains emphatically Wrexham’s youngest player though, nearly a year younger than the second player on the list, Cian Williams.

Roberts' contribution to football in Wrexham is terrific, and it doesn't stop there. Football, and indeed sport in general, in this little corner of Britain has benefitted beyond measure from his work.