After our frustrating journey to Aldershot in October ended in an abandoned match, Wrexham return to the Recreation Ground hoping to replicate the first half performance we put in on that occasion.

We led 2-0 at the break and were comfortably in control of the game, but must now start from scratch and win the three points all over again.

Phil Parkinson's side will have to do it without the presence of either of the scorers from that match, as Paul Mullin is suspended and Jake Hyde injured. However, the likes of Reece Hall-Johnson and David Jones, who were injured at the time of the first clash, are now available, and Luke Young, who was forced off after a robust tackle in the early stages of the abandoned match, got through 90 minutes last Saturday.

Strangely, Bryce Hosannah will be returning to the site of his Wrexham debut that never was!

As for Aldershot, they bounced back from their poor performance against Wrexham with a win at bottom side Dover, but since then have lost all four of their league games.

Narrow defeats to Stockport and Bromley were laudable efforts, but in their last two games they lost damagingly to Weymouth and Barnet, results which leave them second bottom of the table.

Furthermore, their home record remains disastrous: they have yet to pick up a point at home, and have lost 9 consecutive matches at The Recreation Ground. The only other side which has yet to earn a point at home in the top seven tiers of the pyramid are Barwell Town, and to be fair to them, they only played their first home game of the season last Saturday, as they were laying a new 3g pitch. 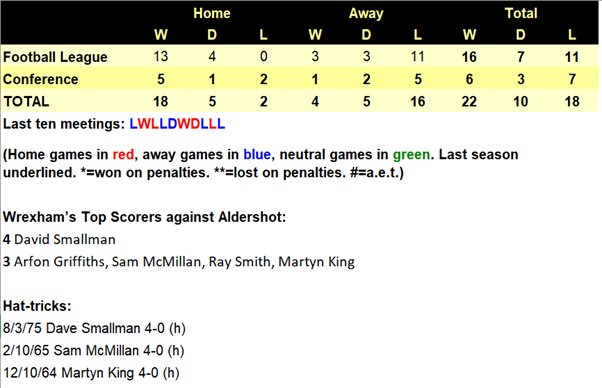 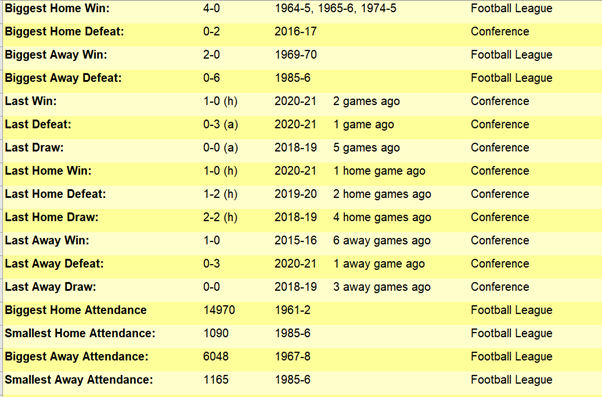 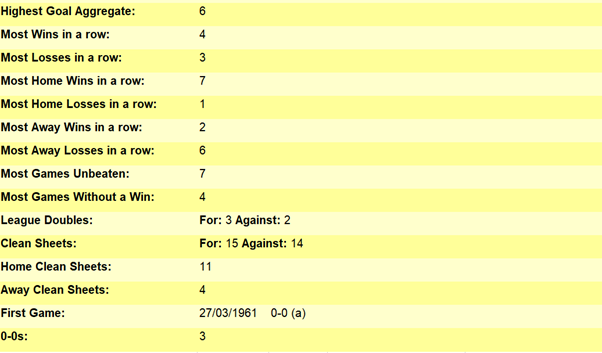 When Aldershot dropped down into the National League, we immediately began a period of domination, winning four of our first six encounters while losing just one. Things have changed drastically since then, though, as we’ve won just two of our last ten clashes, losing five.

Last February we suffered a chastening experience at the hands of the Shots, losing 3-0 at the Recreation Ground. That result continued a dismal run of results there, as it was the fifth game consecutive game at Aldershot in which we’d failed to score. We lost four of them, and our last goal there was scored by Wes York in November 2015, 477 minutes ago.

Before their relegation, we didn’t face The Shots for twenty-two years.

That final Football League match, in March 1991, saw us fall behind early on and never get back on terms despite strikes by Gareth Owen and Geoff Hunter as we went down to a 3-2 loss.

That defeat merely added to the overall trend of our trips to Aldershot, as we’ve lost 16 of our 25 matches there, winning just four times.

Our first win there came in September 1969, when Albert Kinsey opened the scoring and Arfon Griffiths secured a 2-0 win with a penalty.

Our other two successes in the Football League were more dramatic. In September 1974 we fell behind early in the first half but recovered to win 2-1 through goals in the last quarter of an hour from Mickey Thomas and Dave Smallman.

The following season Mel Sutton gave us the lead but The Shots equalised before half time, only to see us once more take control with a couple of goals around the 75th minute mark. Brian Tinnion and Graham Whittle scored within two minutes of each other and although Aldershot swiftly pulled one back, we survived a nervous last ten minutes to clinch a 3-2 win.

We’ve won once at the Recreation Ground in the National League, in November 2015, courtesy of the Wes York strike I mentioned earlier.

Our worst experience there came in October 1985, when we crashed to a 6-0 defeat. It must have been a horrible experience for the fans who travelled from North Wales to watch the match, although there couldn’t have been many of them as the attendance was the lowest to see Wrexham play at The Recreation Ground: a mere 1,165.

David Smallman is our top scorer against The Shots, with four goals, three of which came in one game in March 1975. A goal behind him are Arfon Griffiths, Ray Smith, Sam McMillan and Martyn King, the last two having scored the only other hat tricks in this fixture. 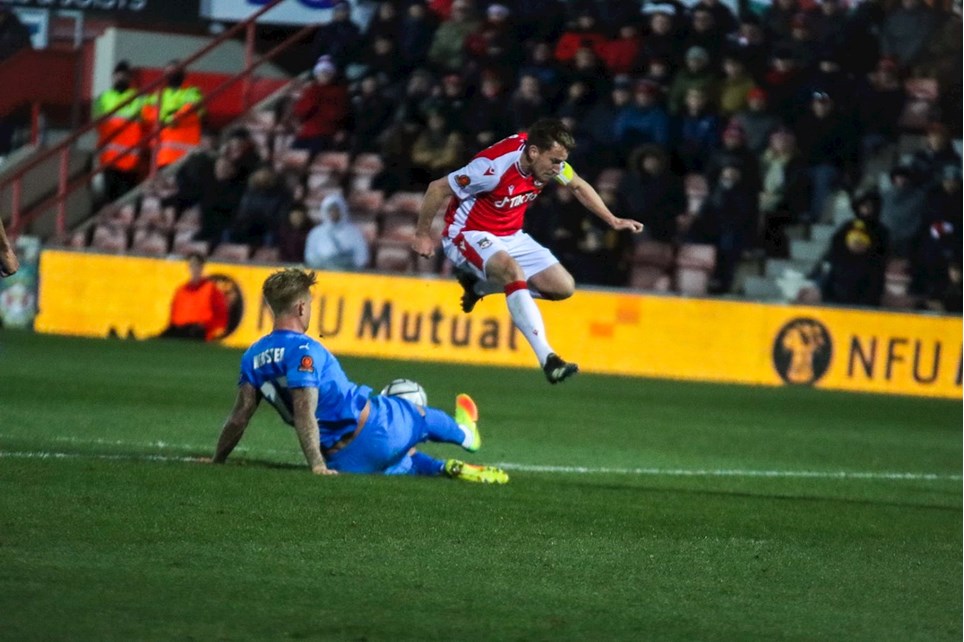 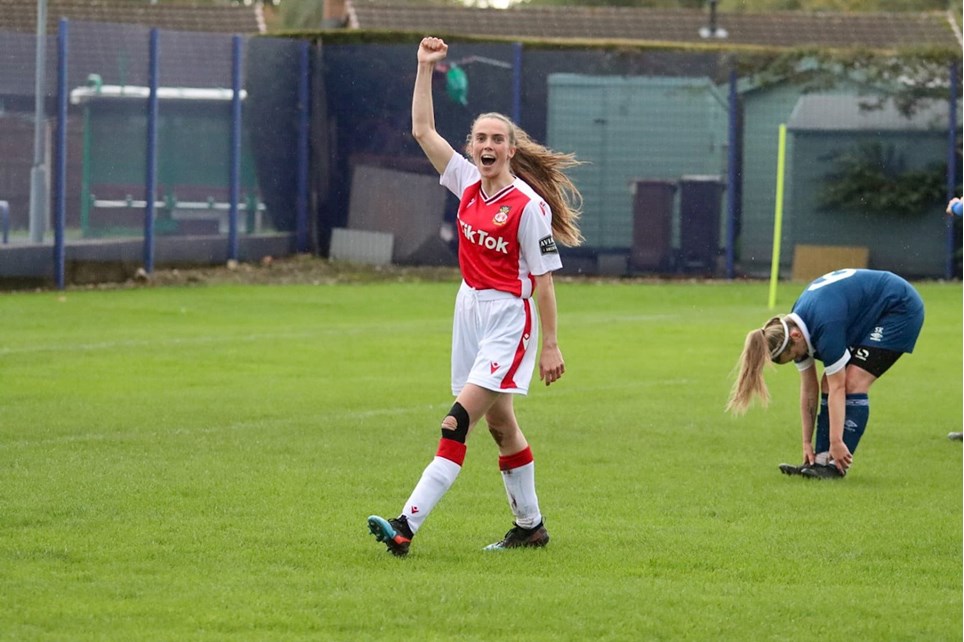 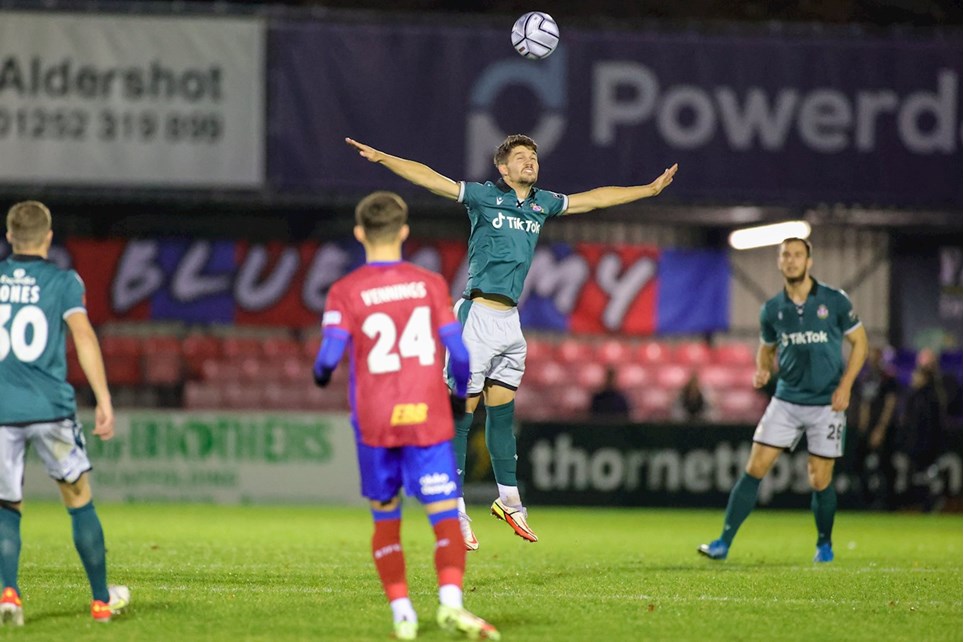 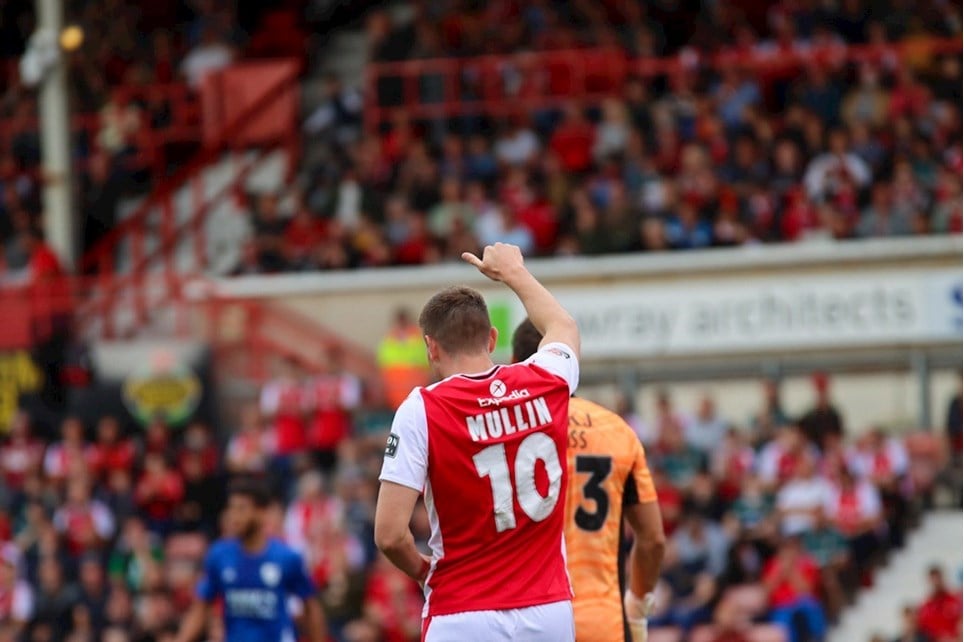