Paul Mullin's spectacular start to his time at The Racecourse means he's already in the record books. 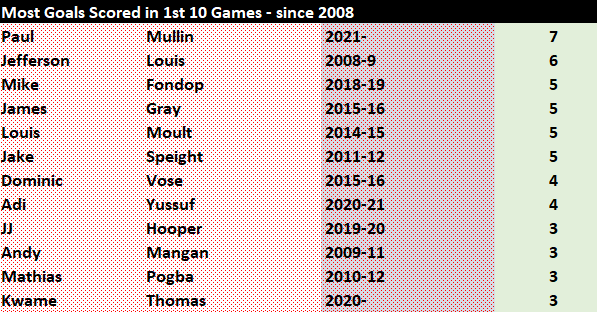 Furthermore, this is the best start a player has made to his Wrexham career since 2006, when Matt Derbyshire hit the net 8 times in his first 10 games. The only other Wrexham players to have matched Mullin this century are Lee Trundle and Hector Sam, who both managed it in the 2000-1 season. 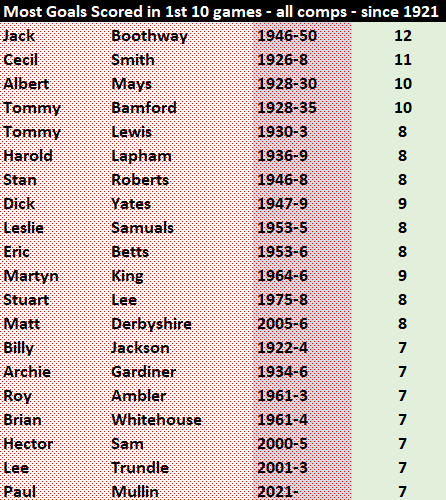 Since joining the Football League in 1921, the best start by a Wrexham player came from Jack Boothway (below), who enjoyed a phenomenal run of scoring after failing to hit the net on his debut at Tranmere in 1946.

The following Saturday he marked his home debut with a hat trick against Darlington, and after drawing another blank at Hull he got two more at home against Gateshead.

Like Mullin, he then put Marine to the sword, beating their keeper 4 times. The only goal against Crewe followed, and he grabbed 2 goals in an FA Cup replay against Lincoln, but couldn't score in either the initial clash with The Imps or the subsequent second replay, which we lost. He also failed to score in a home draw against Southport.

That's 12 goals in 10 games, although the breakdown of the statistics makes his achievement even more remarkable. Four of his first 10 games were away from The Racecourse, and he didn't score in any of them; he hit all 12 goals in his first 6 home games! 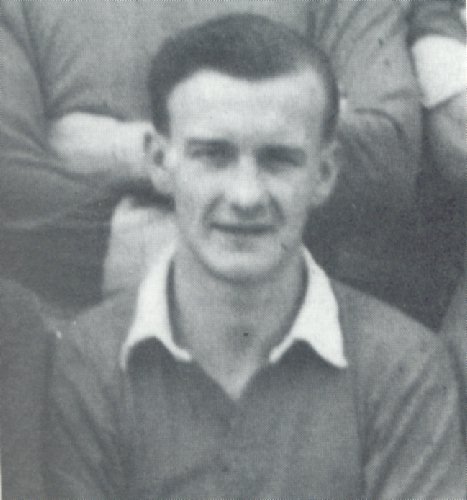 The club record was set back in 1894. Obviously, you have to be careful with statistics from the early days of competitive football, and it's unlikely that the opposition in the Welsh League was too testing for us: we went through the 16-game fixture list unbeaten and won the league comfortably. However, but theres no denying that Harry Trainer (below) got his Wrexham career off to a stunning start.

The younger brother of one of the most significant players of the Nineteenth Century, Jimmy Trainer, Harry spent the early years of his career playing locally for Wrexham Victoria, Wrexham Grosvenor and Westminster Rovers. 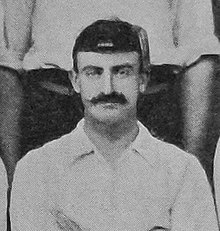 He signed for Wrexham in 1894, a handful of months after he'd marked the aftermath of a 5-3 Welsh Cup semi-final victory over us with Westminster Rovers by being charged with assaulting the landlord of The Talbot!

He hit hat tricks in his second and third Wrexham games, against Rhos and Chirk, got a couple against Macclesfield Town in the FA Cup, and hit four in an 11-1 mauling of Caergwrle Wanderers. He only failed to hit the net in one of his first ten games for Wrexham, as we went out of the FA Cup to Glossop North End.

Trainer ended the season with 20 goals from 17 games, and also made his only 3 appearances for Wales, scoring twice. His prolific season led to a tug of war for his services, but apart from being top scorer for Leicester Fosse in Football League Division Two, brushes with the law meant his career petered out as he increasingly found himself in the dock rather than on the pitch. 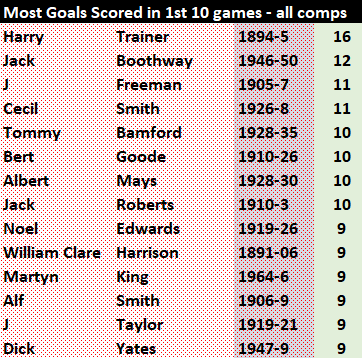