Wrexham AFC today remember the victims of the Gresford Colliery Disaster, which occurred 87 years ago.

The disaster shocked the whole country, and most of all the community of Wrexham, with 266 men lost in the tragedy.

At 2.08am on September 22, 1934, an explosion rocked the Dennis section of the mine, with more than 500 men underground that night – a number tragically much larger than usual as many had many doubled on shifts to watch Wrexham play Tranmere Rovers at the Racecourse Ground later that afternoon.

The subsequent fire was reported to have caused ‘almost intolerable heat’, which rescuers tackled ‘with unexampled courage’.

“Their boots were burned off; their hair and eyebrows singed, and hands and knees were scorched wherever they touched the floor of the road.”

Three rescuers lost their lives in the rescue attempt, as they attempted to explore a return airway to another mining district. That operation itself only recovered 11 bodies, all of whom had been found to have died from carbon monoxide poisoning.

With families of the miners flocking to the pithead, desperate for news of their loved ones, it was said the reports – knowing already all was lost – carried on for the sake of friends trapped further into the mine.

A lack of firefighting equipment, water and a compressed air main hampered the rescue teams and, while the fire was fought continuously, especially in the main airway intake, until the Sunday evening, it was to no avail.

By then, with it certain all men trapped were dead and with conditions regarding the presence of flammable gas too dangerous, it was decided to cap both mine shafts.

Three days later, a further explosion saw one of the seals on the shaft blown out, killing a workman due to the flying debris.

While the rescue operation was in full swing, less than two miles away a crowd of 10,100 were packed into the Racecourse for the Third Division North match against Tranmere.

George Lerry, the Wrexham Leader sports reporter, under the pseudonym ‘XYZ’ reported: “It was only natural that people were unable to turn their minds to thoughts of football.

“The match on the Racecourse between Wrexham and Tranmere instead of proving, as it promised to be, one of the most exciting in the season’s programme, was contested in an atmosphere of restrained enthusiasm under the saddest circumstances in the Wrexham club’s history.

“Both teams wore black arm bands and before the start, players, officials and directors lined in the centre of the field, whilst the crowd stood bareheaded and two minutes’ silence was observed.

“An ironic fact was that the music to have been provided at the game should have been played by the Gresford Colliery Silver Prize band.

“The news of the disaster had become known on the morning of the match and at one time it was thought that the game would be postponed. Personally, I wish it had been so.

“After hurrying from the pit head where I had seen the dead bodies of miners and brave rescuers who had lost their lives – where, too, I had watched other heroes still going down to fight the flames below – I did not find it easy to settle down to the task of taking notes of this match.” 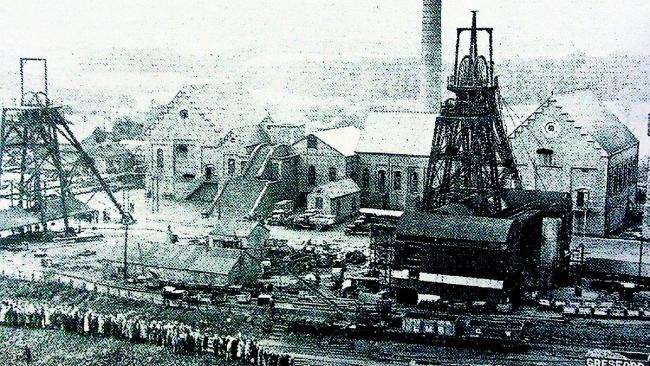 With Wrexham scheduled to visit Sealand Road for the local derby on the following weekend, the Chester FC board held a special meeting to discuss how they could help.

One of the proposals put forward was for a combined Chester & Wrexham XI to play the full Wales international team at the Racecourse Ground.

In the event, a collection was held at Chester and the home directors arranged for some of the collectors to be miners from the colliery who had taken part in the rescue efforts, and they even transported them to the ground by car.

The Chester FC Supporters Committee also gave all their proceeds from the day to the fund and £150 was raised in total.

There were emotional scenes before the game as the crowd of 15,106 sang “Abide With Me” which was followed by a minute’s silence.

The Dennis section of the mine was never reopened and the bodies of the 254 victims were sealed in the mine. Only eleven bodies were recovered, plus the surface worker killed a few days later.

As a result, 1,100 Gresford miners signed on the unemployment register. Relief funds, set up by the Mayor of Wrexham, the Lord Lieutenant of Denbighshire and the Lord Mayor of London. It raised more than £500,00 for the dependents of the victims.

On October 25, 1934, an inquiry was opened and highlighted management failures, lack of safety measures, bad working practices and poor ventilation in the pit.

The following year, court proceedings were started against the Pit Manager, the Under-Manager and the owners of the mine, the United and Westminster Collieries Limited. The court, however, found the mine’s management guilty of only inadequate record-keeping.

Gresford Colliery finally closed on economic grounds in November 1973, before the site was developed as an industrial estate.

To read a roll call of all those who perished, please click this link.

You've heard of the Gresford Disaster,
Of the terrible price that was paid;
Two hundred and sixty-four colliers were lost,
And three men of the rescue brigade.

It occurred in the month of September
At three in the morning the pit
Was racked by a violent explosion
In the Dennis where gas lay so thick.

Now the gas in the Dennis deep section
Was packed there like snow in a drift,
And many a man had to leave the coal-face
Before he had worked out his shift.

Now a fortnight before the explosion,
To the shotfirer Tomlinson cried,
"If you fire that shot we'll be all blown to hell!"
And no one can say that he lied.

Now the fireman's reports they are missing
The records of forty-two days;
The collier manager had them destroyed
To cover his criminal ways.

Down there in the dark they are lying.
They died for nine shillings a day;
They have worked out their shift and now they must lie
In the darkness until Judgement Day.

Now the Lord Mayor of London's collecting
To help out the children and wives;
The owners have sent some white lilies
To pay for the poor colliers' lives.