After 101 years in the Football League, Southend United were hit with double relegation and saw themselves drift from League One down to the Vanarama National League.

Taking one point from their final two games in League Two last year, the Shrimpers finished 23rd in the league, behind a struggling Scunthorpe United.

The failings of the prominent managerial signing of ex-Arsenal legend Sol Campbell and financial troubles, all built up to the club’s drop from the Football League system. However, with successful manager Phil Brown in charge, the Seasiders would be looking to find promotion back into League Two at the first time of asking.

Nickname: The Shrimpers, The Seasiders, The Blues

The Story of Southend’s 2020/21 League Campaign

Southend United finished the League Two 2020/21 season in 23rd, as they finished on 45 points. Two more draws and two less losses saw them finish a couple of points above Grimsby Town at the foot of the table, but they could not muster up enough wins at the end of the season to avoid the drop. The Shrimpers started the season on the back of relegation from League One and a disappointing campaign with manager Sol Campbell. Former manager of Weymouth United, Mark Moseley, signed for the Blues on a three-year deal at the start of their League Two campaign. The club had settled their tax debts with HMRC by October, but no wins and only two draws in ten games left them at the foot of the table. Their form picked up over the busy Christmas period, but the damage was already done and they could not find the form to win consistent games in the second half of the season and avoid the drop.

Sam Dalby: Southend confirmed the signing of Sam Dalby from Watford on a two-year deal earlier this summer. The impressive youngster is definitely one to watch, as he caught the eye of Marco Bielsa, manager of Leeds United. Watford later snapped up the young prospect, seeing him become a regular for the U23 side, scoring 15 goals in 19 appearances in the 2019/20 season. He made his full Watford debut coming off the bench against Tranmere in the FA Cup and so the youngster is a big prospect and will hope to hit the ground running for Southend in their National League campaign.

Jason Demetriou: The former Cyprus international is the captain of the Blues and has been with the club since 2016. Having made 178 appearances for the club, the defender is a mainstay in the side and will be an integral asset if Southend are to reach promotion this season. He is also a handy goal scorer at set-pieces, netting 15 times for the Blues in league competition, making him a dangerous threat against any National League side.

Phil Brown: Brown returned to Southend at the end of last season, in a final attempt by the club to escape the claws of relegation. Safety was too far gone for the Blues, but Brown signed a two-year contract extension in a bid to return the Shrimpers back into the Football League. His previous tenor at the club saw his side runners-up in the Football League Trophy in 2013, but he did accomplish promotion through the play-offs in 2015 to climb the football pyramid into League One. Previously, he managed to promote Hull City to the Premier League for the first time in the club’s history, through the Championship play-offs and did an outstanding job to stave off relegation for the first season. Brown’s experience and accolades speak for themselves and his abilities as a manager will be vital in Southend’s push for promotion.

The last time the two sides met was in the 2005 LDV Vans Trophy Final at the Millenium Stadium in Cardiff, where Wrexham emerged 2-0 winners. Juan Ugarte and Darren Ferguson broke the deadlock in extra time, after a goalless 90 minutes, to earn Wrexham their first ever national trophy. Wrexham also won both fixtures against Southend in the 2002/03 Division Three campaign without conceding a goal, and so Wrexham will be hoping to extend this healthy head-to-head record, 16 years on from that famous final. 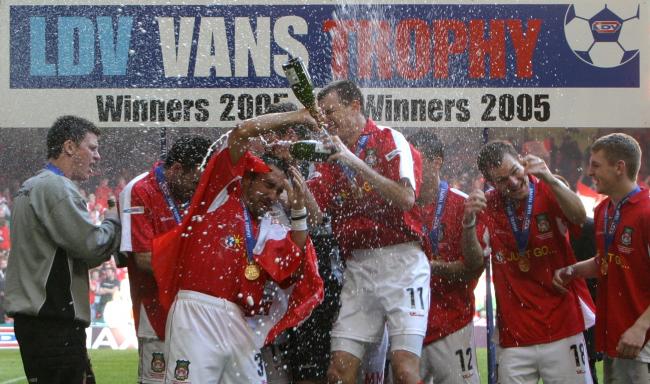 Roots Hall: Southend United have graced Roots Hall, home to the Essex Senior Cup Final, since 1955. The 12,392-seater stadium is currently the biggest football stadium in Essex. However, plans to leave the stadium and play at Fossett's Farm, which would have a capacity of 22,000, have been ongoing since 1997. The move was constantly postponed due to external factors, but it looks set to happen in the near future and so this could be one of Southend’s final seasons at the Roots Hall Ground.