When the fixtures were released, this game stood out as an early season epic. Two local rivals, eager to return to the Football League and backed by owners keen to see that ambition fulfilled sooner rather than later, this is a clash with a 130-year history which is as intense as ever.

In the first part of the Summer, County were the bookies' favourites to win the title as they made a series of eye-catching signings to augment an already-impressive squad. However, as the campaign neared, Wrexham overtook them in the market as we raided the Football League for star turns.

The circumstances of this eagerly-anticipated match-up have, if anything, made it even more appealing. Wrexham haven't quite found the net as regularly as their performances suggest they ought to have done, but are still comfortably within striking distance of the top of the table. Stockport, on the other hand, will be concerned to have dropped 13 points already and will approach the game knowing there's a least a small element of jeopardy: there's plenty of the season left to play, but they won't want to drop 7 points behind their title rivals, or start the campaign with just one point to show from their first 4 home games.

The Hatters were unbeaten in 11 away games before last Saturday's 3-0 loss at Halifax, but at Edgeley Park their form has been worrying, with just two wins in eleven, and no wins in seven.

Prepare for the game with our preview podcast

Wrexham showed their promotion credentials with victory over table-topping Dagenham & Redbridge last Saturday, bouncing back from their first defeat of the season. However, that 3-1 loss at Grimsby raised questions which Phil Parkinson will want to see answered in another tough away assignment. 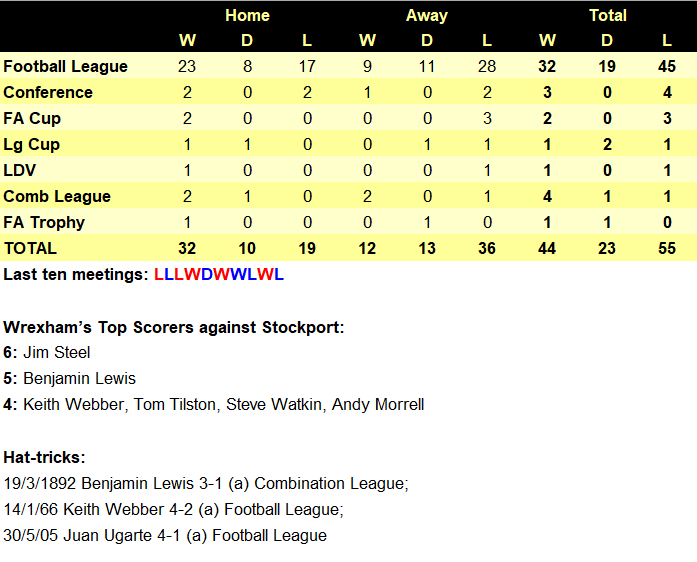 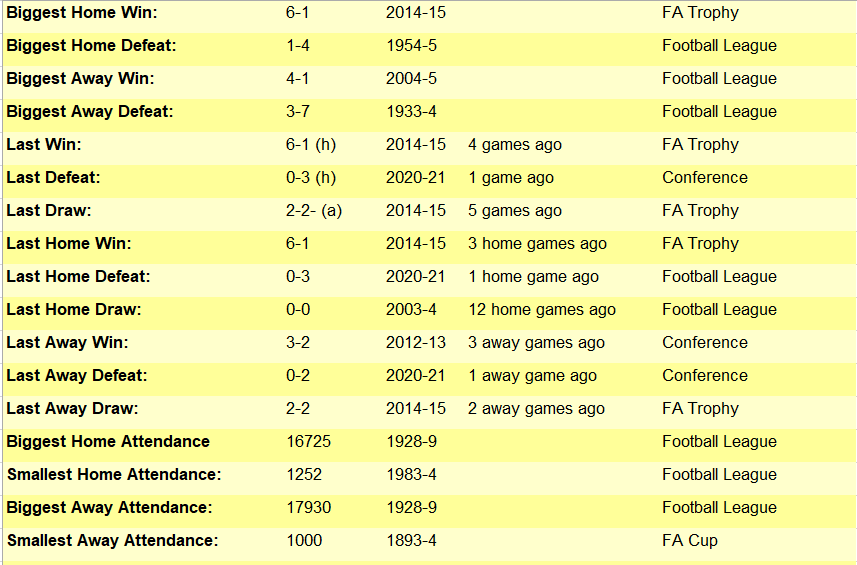 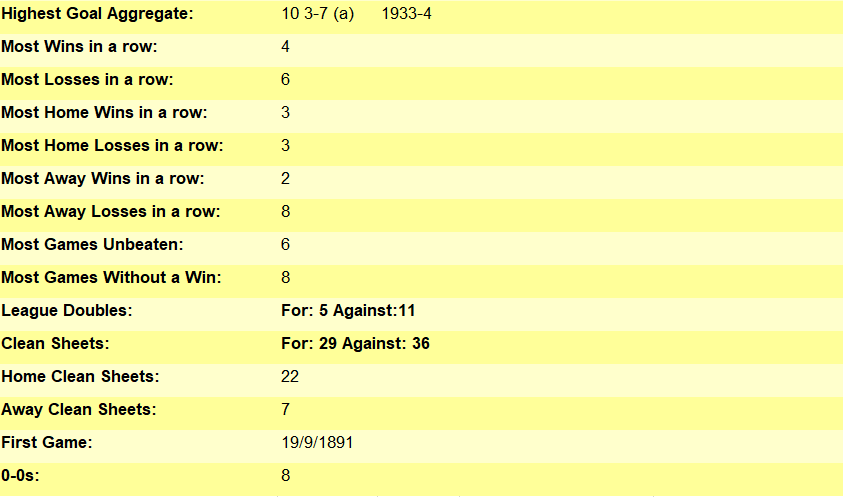 Since Stockport returned to the National League in 2019 they’ve given us a really rough ride. We’ve faced them 3 times, losing all 3 and scoring just once while conceding 7.

We lost 2-0 at Edgeley Park last season, and there was no question that County were the better team by far, although the game might have turned out differently if a strong shout for a penalty and red card after Jordan Davies was pulled down had been successful late in the first half.

We visited The Hatters during their time in the sixth tier, in an FA Trophy tie in 2015. We fell two goals behind, but fought back in the second half with Connor Jennings halving the deficit and Louis Moult earning a replay with a brilliant overhead kick. Things were less competitive when they came to The Racecourse, as we won 6-1, our biggest win in a rivalry which goes back to 1891.

Our biggest win at Edgeley Park also came this century. In April 2005 we were fighting against relegation, with little room for maneuver after a 10-point deduction imposed by the Football League. Denis Smith’s side certainly delivered, as we were 4-0 up before the 30th minute after Juan Ugarte slammed in a 24-minute hat trick, and Carlos Edwards drove in a fine goal.

Our most recent win at Stockport was a terrifically feisty affair. In October 2012 we fell behind halfway through the first half, but swiftly equalised through an own goal. Neil Ashton put us ahead from the spot before the break and scored another with six minutes left, but that was the moment where things really kicked off!

There was a crackling derby atmosphere, and County’s fans had focussed on Ashton, who had already received a yellow card and was skating on very thin ice. After scoring his second penalty he ran to the away fans to celebrate and was dragged into the crowd. Ashton’s delight soon evaporated as the referee took the view that he was celebrating too zealously and showed him a second yellow.

Almost immediately County pulled a goal back, setting up a dramatic conclusion as the ten men clung onto a 3-2 win under Stockport’s desperate bombardment.

To find County’s best result against us you have to go back to March 1934. To be fair, Wrexham put up a good fight and scored three goals, with contemporary reports suggesting we were the better side in the first half despite being 3-1 down at the break.

However, we were unfortunate to run into legendary County striker Alf Lythgoe in spectacular form. He scored 4 goals, completing a remarkable run of 3 hat tricks in 3 consecutive games, and setting a new club record for most goals in a season in the process. County also passed the 100-goal mark for the season, with a good chunk of the campaign still to play.

For the record, Alex Findlay, Tommy Bamford and George Snow got the Wrexham goals.

Jim Steel is our top scorer against Stockport with six goals, one ahead of Benjamin Lewis, a forward from the 1890s. Keith Webber, Tom Tilston, Steve Watkin and Andy Morrell are one goal behind them.

Lewis, Webber and Juan Ugarte are the only Wrexham players to have scored hat tricks past The Hatters. 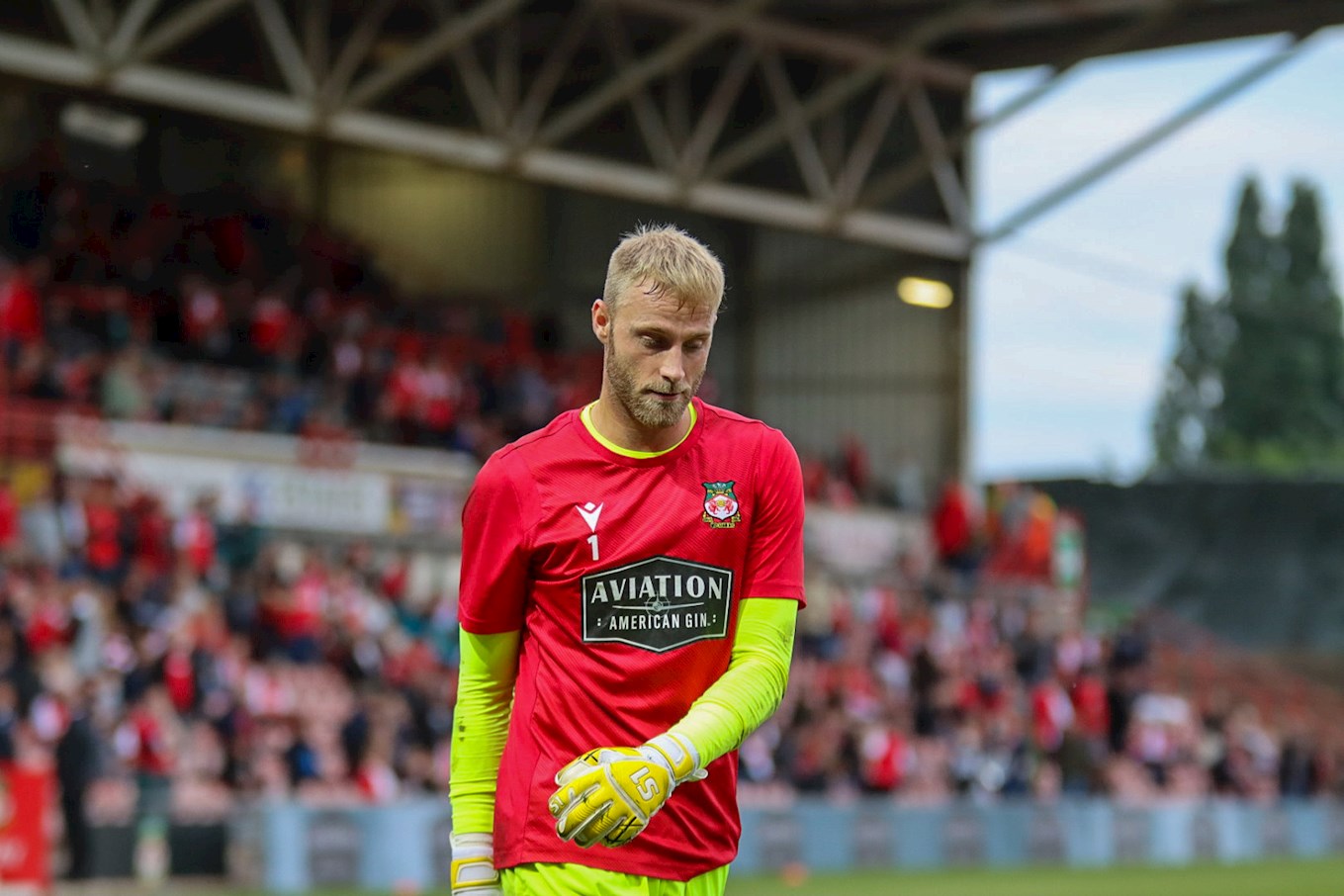 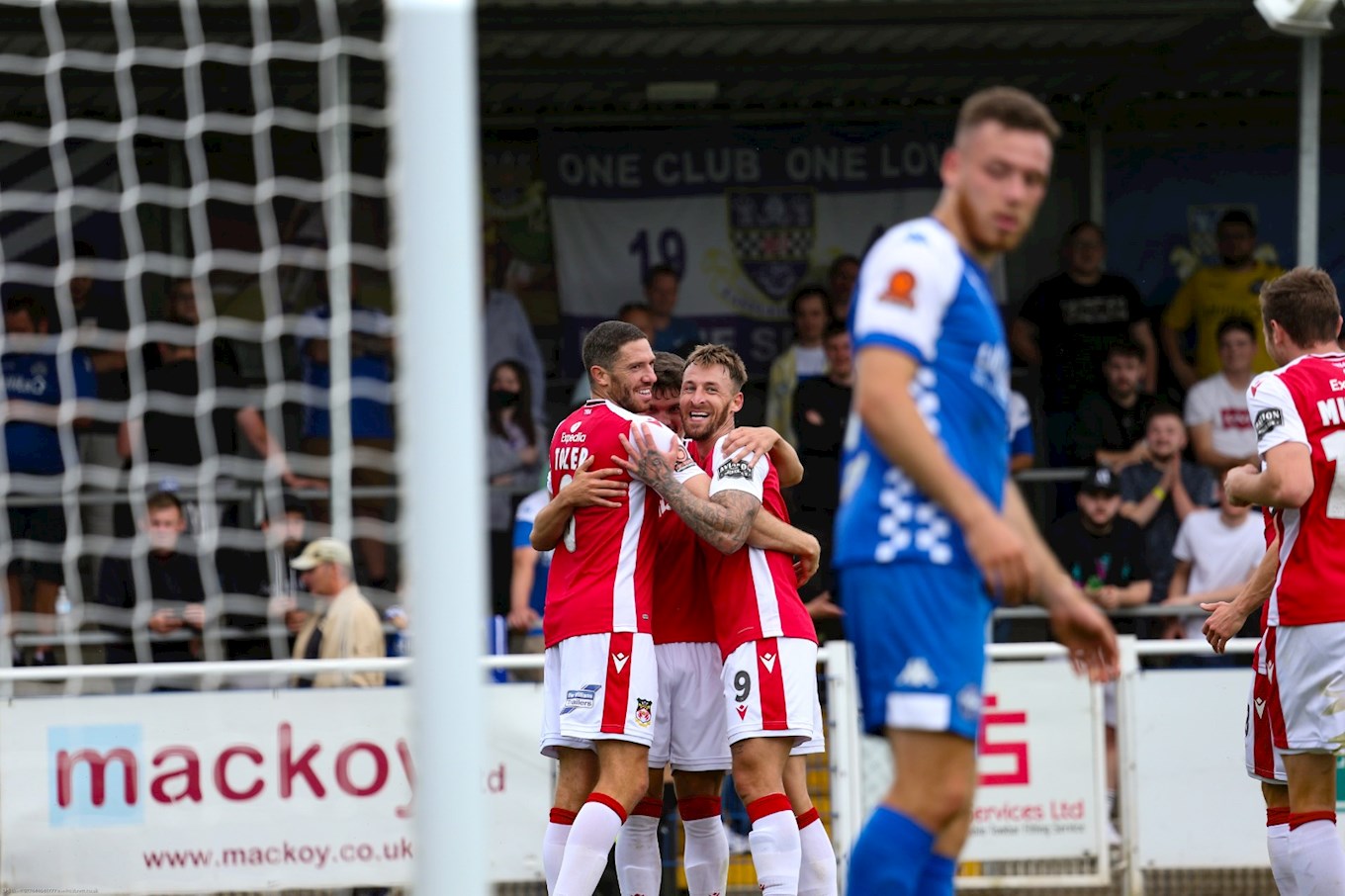