There were some interesting stats to come from the superb crowd against Woking.

Biggest crowd in the National League this season.

Only 3 clubs in League Two have had bigger home attendances this season than today's crowd (Bradford City, Swindon Town and Tranmere Rovers).

12 teams in League One have not had crowds as large as today's this season.

BIGGEST CROWDS AT THE RACECOURSE IN THE 21st CENTURY 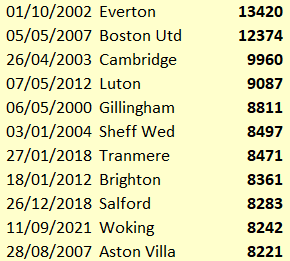 Wrexham have made their third longest unbeaten start to a National League season.

BEST UNBEATEN STARTS TO A LEAGUE SEASON SINCE 1945

BEST UNBEATEN STARTS TO A SEASON SINCE 1945

Phil Parkinson has made the third longest unbeaten league start by a Wrexham manager in the club's history, 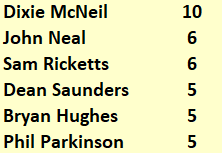 Phil Parkinson has made the fourth longest unbeaten start by a Wrexham manager in the club's history,

LONGEST UNBEATEN START BY A WREXHAM MANAGER (ALL COMPETITIONS)

David Jones received the 2nd red card of his career – the previous one was: 27/8/2016 Brentford 1 Sheffield Wednesday 1

Wrexham are unbeaten in the last 5 games in which a Wrexham player was sent off.

Wrexham’s 8th game unbeaten against Woking – our longest unbeaten run against them.

Wrexham’s fourth consecutive win over Woking, our best run of wins in this fixture.

Wrexham’s fifth consecutive home win over Woking, our best run of home wins in this fixture.

Wrexham have kept 4 clean sheets in a row against Woking (374 minutes without conceding), and 4 consecutive home clean sheets against them (394 minutes).