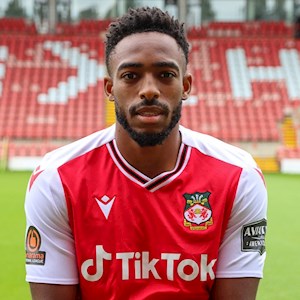 RIGHT-BACK REECE HALL-JOHNSON JOINED THE DRAGONS IN THE SUMMER OF 2020.

A product of Norwich City's highly-regarded academy,, Hall-Johnson came through the ranks of the Premier League outfit, picking up an FA Youth Cup winners' medal.

Hall-Johnson played a key role in that triumph, scoring the only goal in the first leg of the semi-final at Nottingham Forest. A 1-0 loss in the second leg sent the game to penalties, and Hall-Johnson converted the decisive kick to send Norwich through to the final.

After two years as a pro with the Canaries, Hall-Johnson signed for Maidstone United in the National League, making seven appearances for the Stones before a brief spell with Bishop's Stortford.

In 2016 he signed for Braintree Town, making 25 league appearances with his performances for the Essex club earning an EFL move to Grimsby Town the following year.

Shortly after signing for the Mariners he was loaned to Chester FC, making his debut in a 1-2 loss to Boreham Wood in the National League. He featured in blue during the Cross-Border Derby in November 2017 as the Dragons ran out 1-0 winners at the Deva.

Upon his return to Blundell Park, he made his debut in a 3-1 loss to Cambridge United in League Two. Hall-Johnson departed Grimsby in the summer of 2019 and signed for Northampton Town.

During a frustrating spell at Sixfields he made just seven appearances in all competitions as the Cobblers achieved promotion to League One under Keith Curle.

In August 2020 he became the fourth summer recruit ahead of the 2020/21 campaign for Wrexham.

He marked his debut with a goal against Boreham Wood on the opening day of the season, and would build on that promising start.

His swash-buckling runs down the right immediately endeared him to the fans, and his ability to pop up with a crucial goal earned some crucial points as the side pushed for the play-offs.

He ended the campaign with a career-best 7 goals, with another strike against Dover expunged from the records after Athletic stopped playing their fixtures. He also chipped in with 8 assists, making him Wrexham's most prolific creator of goals in the season.

Memorably, he contributed two late winners on the road: a 94th minute goal to clinch a remarkable 3-2 win at Weymouth, and a last minute header to defeat Boreham Wood.