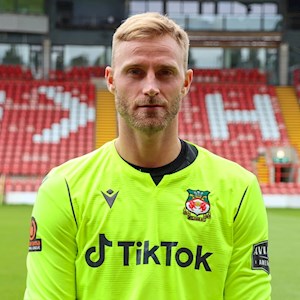 Born in Ashton-under-Lyne he began his career with Bolton Wanderers and progressed through the youth ranks to sign professional terms in 2010.

After three years of further progression, Lainton moved on to Bury where he would compete with ex-Wrexham keeper Shwan Jalal for the number one spot. He made his Shakers debut in August 2013 against Chesterfield.

Over his four seasons, he went on to make 38 appearances whilst also spending time on loan with Burton Albion and Cheltenham Town.

After his Gigg Lane departure, Lainton joined Port Vale in 2017 making seven appearances in all competitions during his first year, making his debut on the opening day of the season against Crawley.

He went on to make a total of six appearances in League Two during his maiden season with the Valiants.

In July 2018 Sam Ricketts made him his fourth signing of the summer on a season-long loan to compete with Christian Dibble. Lainton made his Dragons debut on the opening day of the 2018/19 campaign, keeping a clean sheet and saving a penalty away to Dover Athletic.

Following a string of impressive performances, Lainton signed a permanent deal at the Cae Ras in November 2018 until the end of the season, having kept 14 clean sheets in the opening three months of the National League campaign. In the summer of 2019, Lainton signed a new deal to keep him in North Wales until 2021.

During the 2020/21 campaign, Lainton made his 100th appearance for the club whilst also becoming the 5th highest in Wrexham's all-time clean sheet records - ending the campaign on a total of 45 clean sheets in 102 games during his first three seasons.